Who Told You That?: Setting the Record Straight with Haiti & Vodou 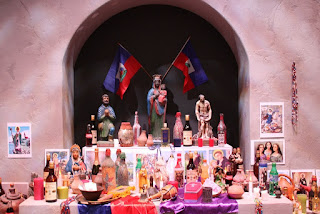 A monstrous burst of martial energy courses through me every time I imagine busting Pat Robertson’s skull with the god Ogun’s iron hammer. As hundreds of thousands of Haitians found themselves in a battle for their very lives after an earthquake rocked the capital of Port-au-Prince in January, the nutty Christian evangelist had this to say during another senseless sermon to his lobotomized 700 Club members:

“They were under the heel of the French, you know Napoleon the third and whatever. And they got together and swore a pact to the devil. They said ‘We will serve you if you will get us free from the prince.’ True story! And so the devil said, ‘Ok it’s a deal.’ And they kicked the French out. The Haitians revolted and got themselves free. But ever since they have been cursed by one thing after another.”


Is Haiti a cursed island? The question has sparked a seemingly endless debate in barbershops across the country and internet chat rooms across the globe. While it is pointless to argue whether innocent people can be cursed before an intelligent reading public, it is interesting to note that even fewer people are willing to entertain the notion that if Haiti were cursed, the hex would be based on its insistence on practicing Christianity instead of Vodou (improperly called “voodoo”). The religion, which is a syncretism of West African spiritual sciences filtered through Roman Catholicism, played an instrumental role in the Haitian Revolution. On the other hand, Christianity was used on Haitian slave plantations to subvert the mind and spirit of the Haitian people and keep them enslaved to their French masters.


Despite these commonly-known facts, Vodou remains a despised religion in Western society, and more importantly, among some Haitians. Some will dismiss Vodou entirely as mere superstition while professing a piece of Wonder Bread and a glass of grape wine to be the flesh and blood of Jesus Christ. Even one of the militaristic colonizers of Pandora made a snide remark about Vodou when he was informed about the deeply-held spiritual beliefs of the Navi people in the movie Avatar. The only way to make sense of the seemingly invincible ignorance that pervades most discussions about Vodou, or any African based religion, for that matter, is to pay close attention to who is shaping our perceptions about these religions.


“Vodou is viable because it lives with, and in, the people and puts them in touch with spirituality as well as God whom they call Bon Dieu,” says Lynda Day, an associate professor of Africana Studies at Brooklyn College via e-mail. “There is a long tradition of Christianity being in competition with any and all non-institutional, non-Christian religions, and since the Middle Ages, anything that is not of the formal church has been labeled “Satanic/devil worship” whether its Islam, the Druids, Wiccanism, Buddhism, Shintoism, or traditional spiritist religions like Vodou.”


Unbeknownst to many, the Haitian Revolution was initially lead by Dutty Boukman (Yes, Dutty was his first name), a Jamaican-born practitioner of traditional African religion who lived on the island of Haiti. Below is the so-called verbal pact that the Haitian hero made with the big, bad, devil during a supposed Vodou ceremony on August 14, 1791. The translated quote comes from the book Written in Blood: The Story of the Haitian People by Heinl Nancy Gordon. In brackets I substituted the French word “blancs” with “whites” for better comprehension:


“Good Lord who hath made the sun that shines upon us, that riseth from the sea, who maketh the storm to roar; and governeth the thunders, The Lord is hidden in the heavens, and there He watcheth over us. The Lord seeth what the [whites] have done. Their god commandeth crimes, ours giveth blessings upon us. The Good Lord hath ordained vengeance. He will give strength to our arms and courage to our hearts. He shall sustain us. Cast down the image of the god of the [whites], because he maketh the tears to flow from our eyes. Hearken unto Liberty that speaketh now in all your hearts.”


As you can see, Boukman and his Haitian comrades were rejecting the white mythological Jesus in favor of the true and living God that resided in the hearts and minds of the Haitian people. Boukman also affirmed that God would give them strength as they broke from the shackles of their French oppressors. So the next time you hear someone say that Vodou is devil worship, kindly ask the uninformed soul. Who told you that?
Posted by Mind Glow Media at 10:28:00 PM