The Story of Sarah Baartman 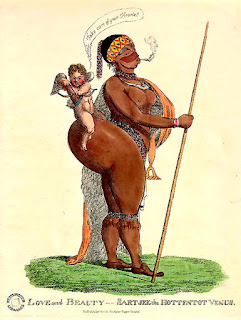 I consider myself a connoisseur of fine art and there are millions of men—young and old, crippled and able, free and bond—who have dedicated themselves to the rigorous study of fine arts, which in this case, is the Black woman’s body. Were it not a shining example of aesthetic excellence, then Black female sexuality would not be commodified to the extent that it has.

But although the highly gifted women in today’s world of adult entertainment chose their career paths under the principle of free will, we must remember that there was a time when physically gifted Black women with similar figures were forcefully brutalized, demoralized, and exploited for their sexual appeal. This was done for the express purpose of fulfilling the perverse sexual fantasies of highly privileged white men. While those so-called tabloid freaks and pornstars may be cashing-in on the despair of lonely hearts and lustful eyes, the women I am referring to were defenseless victims caught between the blood-stained teeth of a ravenous beast called white supremacy. One woman who falls into this category is the famous Venus Hottentot, better known as Sarah Baartman.

Baartman was born in Cape Town, South Africa in 1789. At the time her country was a colony of Dutch settlers known as ‘Afrikaans’ or ‘Boers’. One day while Baartman was working as a slave on a farm on the Western Cape she was approached by an English surgeon by the name of Alexander Dunlop. Dunlop, who was visiting South Africa on business, took special interest in the South African woman. So much so, that he wanted her to accompany him on his trip back to London.

After Governor Earl of Caledon granted Dunlop permission to take Baartman, 21, she left with him for London in 1810. Baartman probably thought that she had escaped the endless torment of enslavement. Instead, she came to know a more sinister form of exploitation. When Baartman reached London Dunlop threw her into the Piccadilly Circus where she was paraded through England as a sexual freak of nature.

Dunlop renamed Baartman “Venus Hottentot.” Venus was the ancient Roman goddess of love and beauty. Hottentot was a derogatory name that European colonialists gave to members of the Khoisan nation which Baartman originally came from. In a severe case of irony, “Venus” received no love from the English, who marveled at her prominent posterior and large genitals. Described as a “wild animal,” Baartman was routinely thrown in a circus cage half-naked as amused onlookers paid admission fees to partake in her spiritual dismemberment. Dunlop, who cashed-in on these cruel exhibitions, laughed all the way to the bank. The English public saw Baartman as another prime example of Black inferiority.

Baartman was later shipped to Paris, France, where she caught the attention of scientist Georges Cuvier. According to Cuvier, Baartman’s “moves had something that reminded one of the monkey, and her external genitalia recalled those of the orangutan.” After the Parisians got tired of seeing Baartman—who had no way of returning to her South African home thousands of miles away— she was forced to a life of prostitution. Forced to adjust to a hostile culture and an unfavorable new environment, Baartman’s life was a virtual nightmare. Ravaged by the venereal rewards of her trade, Baartman died of syphilis in 1815. She was just 25-years-old.

Within hours of Baartman’s death, French authorities granted Cuvier permission to dissect her body. He removed her buttocks, breasts, and brain, which were placed in bottles and put on display at the Musee de L’Homme in Paris. By the demand of former South African presidents Thabu Mbeki and Nelson Mandela, who is himself a member of the Khoisan, Baartman’s remains were finally returned home in January, 2002.

In a grand ceremony that was highly publicized by the international media, Baartman was buried in her homeland in August of that year. While reflecting on the vile treatment that Baartman was subjected to in 19th century Europe, President Mbeki said in a BBC News article: “It was not the lonely African woman in Europe, alienated from her identity and her motherland who was the barbarian, but those who treated her with barbaric brutality.”

Although white men treated Baartman like the “wild animal” that God never intended for her to be, white females have long envied the dynamic physical proportions of the Black woman. As a matter of fact, the high-heel shoe (especially the stiletto) and the bustle (Victorian Era) were created to give the illusion that they had bumpers that were plumper than they actually were. Even today, several white women are finding ways to defy nature’s will. Some are running to the operating table, while others are buying designer jeans with a “special” cut that play optical illusions on the eyes of unsuspecting men. However, most prefer to practice special exercises to get that nice, full look.

In the July 2003 edition of Self, a health and fitness magazine geared towards white women, there is an article titled “Get the butt you want.” On the left-hand side of the two-page spread that introduces the article is a photo of a dark chocolate honey with a ripe Nubian onion that would bring tears to the eyes of the most hardened thug. The picture is focused almost exclusively on her rump, which is about as tight as a million bucks stuffed into a tiny rubber-band. When you flip to the next page, there is another two-page spread featuring yet another black woman teaching special exercise techniques. These exercises are supposed to bless white women with Angel Luv-like backsides. “Use the moves and the companion best-choices cardio guide for four to six weeks, and we guarantee you’ll be flaunting your bodacious booty or at least loving it a little bit more,” reads the article. 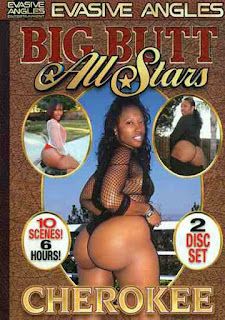 Although the natural allure of Black women continues to be bottled and sold through hip-hop and adult entertainment, today’s Black woman has something that the Sarah Baartman’s of the world never had. She has the power to mold her self-image and control how she is presented to the world. No man, whether he is Black, white, yellow or brown, can portray a Black Woman as a sexual freak of nature unless she willingly grants him permission to do so. This is something that every Black Woman should remember. Not for Sarah Baartman’s sake, but for her own.
Posted by Mind Glow Media at 6:08:00 PM

Wow this was an awesome article.It brought tears to my eyes in memory of the black experience across continents and most importantly it made me sad to think of how we so easily as black women forget who we are and allow ourselves to be objectified. Thank you for your research

Amazing & very informative!! I wish I could share this with like minds. I think alot of african american females are infulenced by pop culture one way or another.

So true, so true. Wonderfully observant of you. Thank you for posting this.

I could not refrain from commenting. Perfectly written!

Everything is very open with a very clear description of the challenges.
It was definitely informative. Your website is useful. Thank you for sharing!