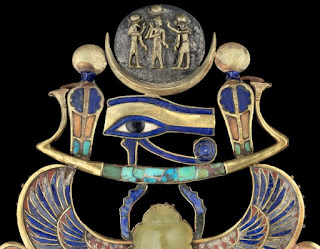 For centuries occultists have spoken of the power of Evil Eye Energy and its affects on our thoughts and biological well being. Dr. Colin A. Ross recently published a research paper entitled: The Electrophysiological Basis of Evil Eye Belief. Ross is the founder and president of The Institute of Psychological Trauma.

“The sense of being stared at is the basis of evil eye beliefs, which are regarded as superstitions because the emission of any form of energy from the human eye has been rejected by Western science,” reads the abstract of the study. “However, brainwaves in the 1–40 Hertz, 1–10 microvolt range emitted through the eye can be detected using a high-impedance electrode housed inside electromagnetically insulated goggles. This signal, which the author calls “human ocular extramission,” is physiologically active and has distinct electrophysiological properties from simultaneous brainwave recordings over the forehead. Western science's rejection of evil eye beliefs may be based on an erroneous rejection of a widespread component of human consciousness, the sense of being stared at, which may in turn be based on a real electrophysiological signal. The author proposes a series of future studies designed to determine whether human ocular extramission is the basis of evil eye beliefs”

What may be considered evil to one man may actually do some good for another. With that said, consider what a nation, or even a large group of people, can accomplish simply by directing one single thought at someone’s image at the same time. While Ross' findings may not be conclusive, I think that they are worth checking out. Below is a PDF download link containing the complete study for your review.