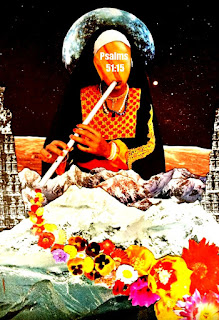 If 24 hours separates an intellectual paradise from an ecclesiastical purgatory, then The Blackest Bible You Never Seen is a Day Up from hell.

Heaven is a relative state of mind, and in his latest E-Lecture the Qabala god, A.A. Rashid, escorts his viewing audience through the pearly gates of understanding with contagious passion and ideological conviction.

“What is the African American experience regarding his initiation?” Rashid rhetorically asks his audience during his July 11th  lecture in Houston, Texas. “Where does he go to become a man? Every other culture in the world has an initiation. You go to the Twa people—who are colloquially called the pygmies—they still have a ritual where they initiate the young men for five months.

Do you know what that is? A lot of us can’t even do nothing for two hours straight. You tell someone to sit down and read for two hours straight, or turn your phone off and just shut up, a lot of people would have a problem with that…What is the culture of the African American? Where are our initiations? The African American experience is profound. You were manufactured as part of a commercial construct. It is very interesting that you are still here existing with pride.”

In this video presentation Rashid extrapolates on one of his most consistent messages to his growing following in recent years, which is that all of the ancient expressions of collective cultural psychology—which many of us call religions—can address the inherent needs of Africans throughout the diaspora. According to Rashid, this requires that the signs and symbols of these philosophical models are processed by the individual so as to ensure collective prosperity in all avenues of human endeavor.

“How you perceive yourself [determines] your mental health,” says the Red House founder, and Freemason, who advocates joining societies with secrets. “You live in your thoughts. The Blackest Bible You Never Seen requires that you and I challenge every letter, every world, inside the [literary] construct to find the best modalities to use in any religion. You should all participate in learning all religions because it gives you a narrative to deal with every single culture in the world.”

Rashid is an interesting figure. He is a man, who over the course of his lecturing career, has ubiquitously lived his life in between the pillars of mercy and severity. He has the introverted mental framework of the brooding intellectual and the shaman.  However, he exhibits an uncanny ability to speak to large audiences in the idiom of the street, or the Ivy League lecture hall in an extroverted way. 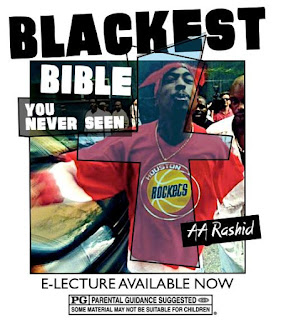 “The young people are the ones who bring your brother out [to lecture],” says Rashid in front of his lecture podium in Houston. “I have to talk nice, and be nice to the elders, ‘hotep’ them and put on dashikis to get them to pull brother Rashid out. But the young people get it because they can look past all of the vestigial elements because they are strivers. They not hatin’ sitting back waiting for you to make a mistake. They lookin’ to get game so that they can take it and run with it. Young people keep me relevant. I got young people at Ralph Lauren who are designing the stuff these negroes are going to wear for the next three years in our school. There are young people at Apple, designing apps and all that. Brothers and sisters all over the world, Africa, everywhere, who are paying attention to what we are doing. You're an exceptional person if you’ve ever even heard of me, because there are so many chambers to get to just to get to mine. ”

Within Rashid’s two extremes there are many mindscapes of hidden potential, which may explain why he is actually expanding in his creative breadth at 40 years of age, a time when many other men are past their artistic prime. Rashid, who told me that he just started rapping about three years ago, has recorded impressive hip hop tracks like “Fard Fila,” and “Randy Savage” while producing imaginative graphic artwork to promote his merchandise and social events.

His latest offering, The Blackest Bible You Never Seen, is a valuable addition to the video library of longtime students, and a formidable introduction for new ones who have grown weary of conspiracy laden narratives and are in search of practical applications for personal empowerment.

To contact A.A. Rashid about obtaining his lectures, music, books, and rare African American cultural memorabilia, you can email him at qabalagod@gmail.com. For further information concerning his work, you can also find him on YouTube through his Red House channel.