Every Nigga's AStAR: The Authorized Biography of Osiris 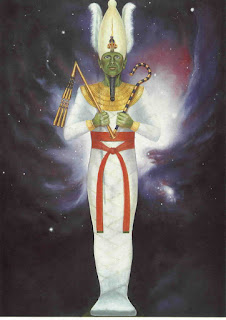 After walking for several miles, we all started to wonder where the High Priestess, Sekhmet was leading us. Two hours into our journey through the Zep Tepi desert, we came upon a temple waiting in the distance. It was a magnanimous pyramid decked in shimmering gold surrounded by four golden obelisks positioned at each of the pyramid’s four corners. At the very top of each one was a crescent moon of silver that scraped the heavens blue. As Sekhmet lead us into the pyramid’s arched opening we were immediately enveloped by absolute darkness. “Sekhmet, where are you taking us!” yelled Osiris, whose voice quivered with fear.

“As I told you earlier, my son, I am taking you all to meet the High Priest of Atlantis,” Sekhmet answered. “She’s a fuckin’ liar! The bitch is leading us into a trap,” growled Sahu, one of the other initiates, who savagely lunged at the Priestess. As the hulking coward wrapped his brolic, muscled  arms around Sekhmet’s tiny neck in a chokehold his body suddenly erupted into a bonfire of burning flesh. Sahu disintegrated into a fine mist, leaving nothing behind; not even the smell of his charred carcass. As we all stared at the petit priestess in horror she slowly spun around to face us with the purifying fires of Khenti Amenti  in her eyes.

“I want you gentlemen to listen, and listen very closely,” roared the old, wrinkled, dread-locked woman. “You have all worked for 33 years to reach this point in your initiation. That means that there can be no turning back. We must proceed forward until you reach your final destination. If you quit now, all of your names will be erased from the Lion’s book of life. Live or die; the choice is yours!” Shaking intensely, we all nodded our heads in compliance with the fierce Lioness. Sekhmet cracked a demonic smile then proceeded on her way as we hastily followed her lead. “Fear not gentlemen….we shall be coming upon the High Priest’s sacred chamber shortly,” she said with an almost sinister calm.

As we continued to walk through the temple, we grew extremely cold and increasingly frightful of what might await beyond the darkness. All that I could see was Sekhmet and my fellow initiates as they walked in single file before me. It was an extreme darkness that only magnified the sharpness of their images. Their skins were a radiant brown and their white garments glowed with vivid purity. A few moments later, what appeared to be a shooting star coming from the right wizzed passed us followed by three more on our left. “In the name of Ra, what is going on, Sekhmet. Where are we going?!” Osiris cried. “Have courage my dear,” Sekhmet reassured. “We shall be approaching very shortly.”

As I looked down towards the ground I was shocked to find there was none. “What could be holding us up?” I thought as severe panic began to set in. Before long, we were all greeted by pulsating stars numbering in the hundred’s of thousands. We then saw a bright red dot on our far left that was rapidly increasing in size before we realized that it was the planet Mars, which shot right by us. Actually, as it turned out, WE were the ones who sped by it. You see, much to our surprise my brethren and I discovered that the entrance to the golden pyramid was actually a gateway to the cosmos that we were swiftly marching through despite walking at normal speed. We flashed past Jupiter, Saturn, Neptune, Uranus, and Pluto as we marched boldly through the boundless blackness of inner space.

Eventually, we came upon a space portal shaped like a woman’s vagina, flashing a luminous white light that extended several light years. As we stood at a good distance from the portal’s opening a figure emerged within the light. It was the figure of a kinetic king adorned with gold, radiance and glory. His skin was as black as an obsidian mirror with a well-polished sheen. He wore a green, suede robe studded with sparkling diamonds arranged in an intricate dragon motif. Around his neck was a gold rope chain with a huge disk bearing the all-seeing eye of Ra with a blazing emerald jewel as its pupil. Upon his head was a tightly fitted green skullcap with a diamond-studded design that depicted the sun, moon, and stars. His face was serene and youthful, characterized by prominent cheekbones that gave him an almost serpentine appearance. His eyes were as lamps of fire that burned to the core of our very souls. My fellow initiates and I kneeled in humble reverence before this mystic stranger of unfathomable radiance. He communicated with us telepathically, transmitting iron words forged in the cosmic fires of Amenti. His voice in our heads was majestic and thunderous.

“Greetings gentlemen. I, Ptah congratulate you on your monumental accomplishment. You have walked a path that most have feared to tread and have reached the summit in your uphill quest for universal truth and enlightenment. After 33 years of hard work and preparation you can finally count yourselves among the glorious Sons of Light. You have gained complete and total entry into the Intergalactic Brotherhood of the Nagas.”

Immediately Thoth, Osiris, Set, Anubis and I erupted into a mini-celebration before we were interrupted by another telepathic transmission from the black god with the starry crown.

“Silence gentlemen. There is more that I have to share with you. It hurts me deeply to tell you this, but in the next eight years your entire continent will sink to the bottom of the ocean as a result of an approaching Pole Shift. Most of your countrymen will perish, including your families. However you will not have time to mourn over your respective losses as I will entrust you with the responsibility of carrying out an extremely important task.

The accumulated wisdom of our race must be preserved if humanity is to continue with its spiritual evolution in the years that follow this horrific cataclysm. To ensure that this happens, I am appointing Osiris to lead you and a remnant of Atlanteans to the continent of Ethiopia. There, you will build new civilizations in the North East region based upon the teachings and precepts of your great and noble ancestors, and…

“Why should we follow Osiris?” Set interrupted as Osiris bowed his head with shame. Despite reaching this stage in his initiation, Set had not purged himself of the beast within, while Osiris lacked the backbone that was necessary for true leadership. One had to wonder how and why the two men got this far in their initiation. “Lets face it, Ptah: Osiris is a pussy! The little bitch ass nigga couldn’t find his way out of the rain. I command you to reconsider. I feel that I….”

“Silence mortal, or I shall strip you of your rank!” thundered Ptah as Set cringed with fear. “You will play an important role in the scheme of things, but on this matter I will not elaborate. From the womb of this dark continent in the east will come the light of a brand new day and every kingdom of the earth shall be warmed by its natural splendor and divinity. Then, after many moons of uninterrupted prosperity, great trials and tribulations will befall you and our kind. A new man shall rise within the earth, the snow men from the north, and they will crush thee with an iron heel and place a yoke of iron around thy neck.

He will come from the other end of the earth in ships as swift as an eagle flieth and will take thee for bondmen and bondwomen. This New Man will be of fierce countenance and will not care for the young or the old, the sick or the able, the women or the children. He will take some of you as slaves to what remains of the great Atlantis, which will be nothing more than a group of islands in the surrounding waters. The rest of you will be shipped to The New Atlantis, where you will labor as beasts in the cotton fields from dusk to dawn. There you shall toil all day, but the sun will not have mercy on you. Strange fruit shall swing from mighty oaks in this land where thievery and bloodshed are the gospels of the wicked.”