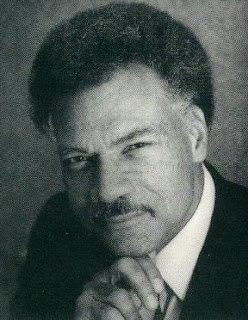 Last night I was informed of a radio announcement stating that Ivan Van Sertima had died at the age of 74 on May 25th, Memorial Day. When I became engrossed in African studies in 1998, my good friend Damion Reid told me about this brilliant Guyanese scholar who wrote and edited some of the finest books that I would ever read on classical African civilizations. Damion leant me a copy of Egypt: Child of Africa and my personal sense of who I was, and what I could accomplish as a man in this world, rose to greater and greater heights.

However, Van Sertima's scholarship also helped me realize--perhaps more than anyone else's--that the Black man's history and culture was not limited to the United States, the Caribbean or even Africa. He showed me that we are in fact a people of GLOBAL import, as we have nurtured and left an indelible mark on every culture we have encountered.
For evidence go out and purchase other great works which Van Sertima either wrote/co-wrote or edited such as The African Presence in Early Asia, Golden Age of the Moor, The African Presence in Early Europe, Black Women in Antiquity, Egypt Revisited, Ancient Future and his magnum opus They Came Before Columbus: The African Presence in Ancient America.

In the profession that I am in, I have had an opportunity to meet more than a few entertainers and celebrities but the only time I was ever Star Struck was when I met the Rutgers University professor. The year was 2002 and Medger Evers College in Brooklyn had honored him for his academic contributions to the cause of Black self-realization. I was writing a story for a newspaper I worked for at Brooklyn College. With no photographer, I had to take my own pictures with one of our newspaper's cameras.

I remember introducing myself to Van Sertima and stuttering how much I appreciated his work before I asked him to pose with his wife while I took a few pictures. It was obvious that he was tired, having just given a two-hour lecture, but that didn't stop me from bothering the man for a few poses. My editor-in-chief never asked me to get pictures, much less write an article, nevertheless I felt compelled by a sense of history. Some of it personal, some of it was not. I knew that I may not have that moment again. As it turns out, I was right.

Van sertima was a good soldier. He posed for this annoying amateur photographer/reporter. One picture came out great and my article was even better. A lot of Black students and faculty members on campus enjoyed it. I hope that future generations will come to appreciate the wonderful gifts that Van Sertima has left behind and that they enrich their lives just as much as they have enriched mine.