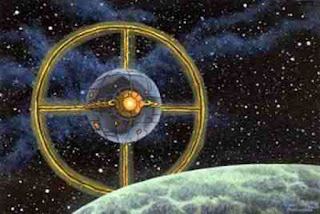 As we draw closer to the year 2012, many people in the Conscious Community are looking at it as a time of profound worldly significance. As numerous references are made to the Olmec calendar, which ends on December 21st 2012, there is a lot of Doom & Gloom talk about what is actually going to happen on that day. The fact of the matter is that the next three years are going to be rewarding to those who have dedicated themselves to their own intellectual growth and spiritual advancement.

Unfortunately, there are a lot of predators in the so-called New Age community who are trying to keep us from receiving the gifts of the Heru Harmonic by characterizing 2012 as a year of “war,” “famine,” and “social upheaval.” These individuals are nothing more than Frequency Cock-Blockers trying to deprive us of the moist and tender clutch of the Cosmic Matriarch. They divert our attention from the rise of our god consciousness by showering us with stories about Planet X and all types of natural disasters fostered by a Pole Shift.

There is even a movie called "2012" slated to hit theaters this year. Based on the movie trailer, it appears that the movie was specifically designed to engender a sense of fear and dread among members of the general public whenever they think about the year 2012. Most people are not ready die. They want to live and enjoy the pleasures of life, so if the popular culture reinforces the idea that 2012 is something to fear, then when the year finally rolls around they’re more likely to be spooked out because of all of the negativity that has been associated with that year.

Fear weakens our spiritual vibration and opens us up to all kinds of manipulation from dark forces. This is the state the Killuminazi wants us in. They’re about to be on the receiving end of a cosmic ass-whipping, a real universal beat down. Their backs are against the wall. All of this fear-mongering that the Killuminazi and their New Age agents are engaging in is nothing but a desperate attempt to keep your mind off of what 2012 is REALLY about: your ascendancy to godhood and their fall from power.

WE ARE THE REAL ILLUMINATI. They are the pretenders. In the movie Wizard of Oz everyone bowed before the wizard with fear and awe only to discover that he was not "the great and powerful wizard of oz" just a weak, old chump pushing buttons behind a curtain. “The All-Powerful All Knowing White Man” that a lot of conscious people like to talk about so much is the Wizard of Oz. We need to stop giving him so much credit for everything significant that happens under the sun. He doesn’t have the kind of control over the planet that we think he does. At least not now. If he did, we’d all be dead already. We let him have the earth and everything on it for a while so that we can better appreciate how it feels to be on top by remembering what it feels like to be on the bottom. For more on that subject read my blog “The Godz Must Be cRAzy."

Have no fear for Planet X. If it comes anywhere near earth like all of these New Age sensationalists are saying, then it only works to our benefit anyway because the Annunaki are our distant ancestors if you follow that whole story corrrectly. The most recognized writer on the Annunaki and Planet X is Israeli archaeologist Zecharia Sitchin. His magnum opus was his first book The 12th Planet which tells the story of how the inhabitants of Planet X, the Annunaki extraterrestrials, set up shop here on planet Earth and established ancient Sumerian civilization.

Sitchin says that prince Enki, followed by an elite group of Annunaki scientists and worker drones, mined African gold in a region called “Arali” which was located in Africa’s southern region. (p.320). Sitchin also says that the Akkadian pictograph for the name “Arali” resembled those that read “dark red soil of Kush” later translated to mean “Negro” (p.321). Hmmm….Sitchin then talks about how Enki and the Annunaki made modern man by combining their own genes with those of the Homo Erectus’ they found in Africa’s interior. This, he says, explains why man’s evolution from Homo Erectus to Homo Sapiens occurred in such a relatively short period of time. We were, as he claims, genetically upgraded through the acquired genes of the gods. According to Sitchin, this was achieved when the Annunaki mixed their blood with the “dark red soil,” and infused it into the Homo Erectus’ skin so that they would forever have the image and likeness of the Annunaki (p.356). This is the same dark red soil that Sitchin says was later translated to mean Negro. It should then follow that if Black Africans were made in the image and likeness of the Annunuki, then the Annunaki must have been Black themselves.

What gives this away is the fact that Sitchin says near the end of his book that the Annunaki, following a truce between warring brothers Enlil (Demiurge/Jehovah/Yahweh) and Enki (Prometheus/Lucifer/Damballah Wedo)after the Great Flood, appointed Earth’s very first king who functioned as an intermediary between the gods and the rest of humanity. This King whom the Annunaki appointed was “Kish,” who was followed by Nimrod (p.416). However, on page 20 of the same book Sitchin uses the names “Kish” and “Kush” interchangeably. Kush was the name of Nimrod’s father according to the Bible. Kush is also a kingdom that arose in Nubia, which all serious historians agree was inhabited by blue-black Africans. It’s commonly accepted among scientists today that humanity traces its origins to Africa. The Bible confirms this as well. The Bible clearly states that after the “breath of life” was breathed into man he was planted eastward in Eden (Gen. 2:8) or E.din which was an actual city in ancient Sumer. If man was brought to the east, then he must have been coming from the west. Africa, the birthplace of man, is geographically west of E.din. Personally, I don’t take Sitichin’s writings as gospel. However, if YOU do, then I think that it is important for you to get a more accurate perspective than you’ve been getting with respect to Planet X and the Annunaki.

Stay focused on your own personal growth and development. Stop worrying about freemasons, the bilderbergers and jesuit priests. A lot of the stories about them are true, but if we are practicing the occult sciences of our ancestors then there isn’t much the Killuminazi can do to harm us. Would you like to know why? Because WE ARE THE ILLUMINATI and everyone knows that no one can defeat the Illuminati.
Posted by Mind Glow Media at 10:44:00 PM