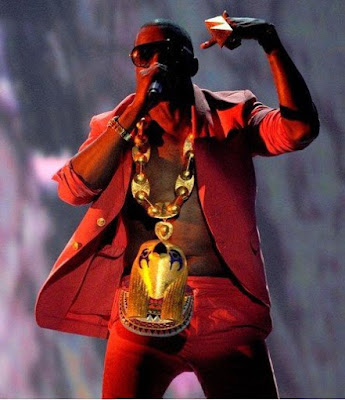 I didn’t watch the BET Music Awards last weekend, but the day after it aired, one of my boys who watched it told me that Kanye West wore a huge custom-made gold chain with the ancient Kemetic god Heru on it. I figured that this was worth checking out, so that's exactly what I did. According to reports, Kanye’s truck jewels designed by Jacob the Jeweler—which also includes a four-finger pyramid ring made of 24 karat gold—cost $300,000.

Kanye, who visited the King Tut exhibit in New York City's Times Square in June, opened the awards show by performing “Power” the first single off of his fifth studio album, Good Ass Job. This new album is supposed to mark Kanye's return to his precocious rhyme spitting, which is unlike the candy bars he spat on 808s and Heartbreak. There are a few interesting points of note that I’d like to briefly go over here. 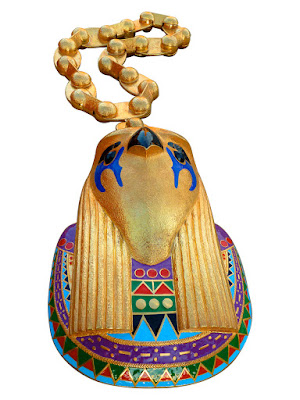 For starters, the fifth sephirah on the Kabbalistic Tree of Life is Geburah, which literally means “strength” or “power” in Hebrew. Again, “Power” is the first single off of Kanye’s fifth studio album. Before you can effectively exercise power over yourself or your environment you must first develop a strong sense of will, which is associated with the sixth sephirah on the Tree of Life, Tiphareth.

If we substitute the Hebrew names for the sephirahs on the Kabbalistic Tree of Life with Kemetic deities, then the sphere Tiphareth would correspond to the god, Heru. During his performance Kanye wore a red suit. The color red is sacred to the god Heru. In the opening to the song “Power” Kanye says “I guess every super hero needs his own theme music.” The Kemetic god Heru is actually the world’s first super hero. As a matter of fact, the English word “Hero” comes from the ancient Kemetic name “Heru”. On his song Kanye raps from the perspective of those who are jealous of the fame and power that he has accumulated over the course of his career. He says:

“No one man should have all that power
The clock’s tickin’, I just count the hours
Stop trippin’, I’m trippin’ off the power
‘Til then, fuck that, the world’s ours”

The unidentified haters that Kanye is referring to apparently realize that their time to rule over planet Earth is short, but until their Ragnarok comes, they’re going to ball until they fall because they have no other alternative. It’s interesting that Kanye makes reference to the clock which has 12 numbers on it. These 12 numbers represent the 12 houses of the zodiac that the Heru man or woman passes through in the unfoldment of god/goddess consciousness. As I’m writing this it suddenly occurred to me that the word “Hour” comes from the name “Horus,” which was the Greek name for the Kemetic god Heru. There are 60 minutes in an hour and the 6th sephirah (6 being a factor of 60) on the Kemetic Paut Neteru (Tree of the Gods/Tree of Life) is Heru.


Kanye reportedly spent $300,000 on his Kemetic jewel pieces. According to Godwin’s Cabalistic Encyclopedia the number “300” represents the 24th path (2+4=6) on the Tree of Life, which represents the transition from Netzach to Tiphareth, the sixth sphere. 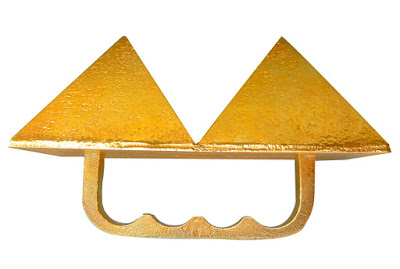 If hip-hop is as dead as the god Ausar, is Kanye West facilitating his redemption by musically ushering in the age of his son, Heru? We can only wait and watch.

www.mindglowmedia.blogspot.com
Posted by Mind Glow Media at 4:23:00 AM