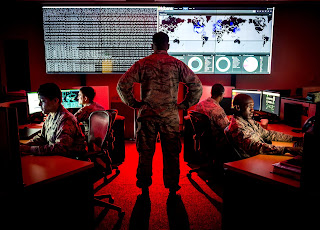 The English language, and how a word can be used to shoot a single mode of thought that penetrates multiple chambers of modern culture, make it a subtle and therefore effective tool for social engineering. The internet was introduced to the world by the U.S. military which uses words, sounds, and images as the advancing mechanisms of its bloody creed. This creed is conflict for the sake of conflict for profit at all costs.


When a piece of media receives a critical amount of attention in the cyber world through shares we say that it has gone “VIRAL,” an adjective that denotes the properties of a VIRUS. A virus is a biologically transferable poison, so anything “viral” is poisonous to someone, somewhere, at some time, and therefore causes harm by its very nature.  If one person is harmed through psycho-spiritual violence, then we have all been violated.


Poisons are weaponized chemical agents, and all forms of weaponry fall under the domain of a military. People are quicker to start fights and arguments on social media platforms that they wouldn’t normally initiate in real life because the internet and its social media platforms have spiritual roots in the military which is an institution of organized death and destruction through conflict.


World War 3.0 began in 1991 when the World Wide Web was first made available to the general public. All overt physical wars since 1991 mark World War 3.1, 3.2, 3.3 and so on. Today millions of civilians across the globe are willing participants in cyber combat on countless socio-political fronts that create reverberating effects on the objective plane of day-to-day human interaction.


The Wi-fi signals of conflict and opposition promulgated by the internet trickle down from the ionosphere to mount human bodies like horses through the military-industrial complex’s global apparatus of techno-voodoo malware. Its “viral” programing has people acting out of character. What’s gotten into us? My question is literal, not figurative!

C++ is computer programing language  that figures the Christ in between two criminals on a cross to play out a bloody mythology of torment, hatred, and social injustice. Look carefully at America and its wide variety of racial, ethnic and economic classes. They ALL believe that they are victims of torment, hatred, and social injustice which feeds the Victim-Predator Matrix enforced by the C++ programming language I described above.

The World  War 3.0 program becomes vulnerable with the creation of unbiased web-based media platforms where seemingly opposing voices on a subject are re-contextualized as complimentary voices advocating one common principle of collective prosperity.  In the near future I see men and women of diverse philosophical perspectives having mature dialogue free of fluff, rhetoric and emotional provocation for Jerry Springer entertainment value. This will be a catalyst behind progressive social reform.

The fundamental answers to human conflict lie in the commonly shared space of multiple overlapping circles of conviction. The year 2024 will be a critical year that will shape world culture and how the internet is used for decades to come.

For my 7 Days of Darkness promo you can purchase my book, The Treasures of Darkness, for $19.99 (that includes shipping and handling). The offer ends December 29th. Just go to www.MindGlowBooks.com.