The Turquoise Tablets of Adika the Atlantean 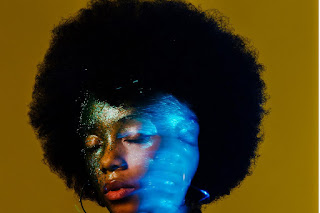 I recently went deep-sea diving through the vast ocean of music and written documents on my external hard drive and uncovered a lost project. It was my very first book that I started writing back in 2002.

I never finished writing this book tentatively titled The Shattered House of Illusions because by 2004 I had grown out of the conspiratorial angle I had taken with it. I had a lot of messages throughout the chapters promoting the idea that the “big bad Illuminati is coming for us. Hide the children and close your doors.”

I also pumped my breaks on the project because I didn’t feel like I had the real life experiences I needed to really qualify some of the stances I took in my writing. I was just 24 when I started writing the book. I sounded smart, and had some good insights, but I didn’t have a personal reference point for a lot of the things I was writing about.

Also, if what I’m writing does not give me a surge of energy, and make me feel powerful while I’m writing it, why the fuck should I share it with you, the reader? I would only be transmitting to you the feelings, thoughts, and emotions that I felt while I was writing. If my reader does not feel personally empowered, then I have failed them as a teacher building on matters of the spirit and the expressions of mind.

Although the unreleased book’s overarching narrative is straight basura to my far more critical 40-year-old eye, it’s filled with information and ideas that I still think are valuable. Here’s an excerpt from this work that I’ve never shared with the public until now:

“For Aquarius, Voodoo was not the primitive hybrid of African shamanism that people think. It was a sophisticated form of magickal mathematics and physics which supposedly originated on the lost continent of Atlantis” (p. 85).

The figure “Aquarius” that Schnoebelen is referring to in that quote is none other than the white Catholic Bishop and occult author, Michael Bertiaux, who wrote the Voudon Gnostic Workbook. Bertiaux changed the name from “Vodun” to “Voudon” in an effort to metaphysically trademark the African spiritual system as his own  interpretation. 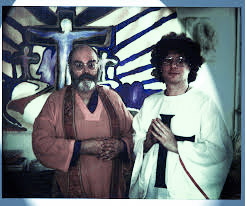 Michael Bertiaux on the left

When European thinkers come across a powerful African spiritual system that they see as useful they will often attempt to de-Africanize it by attributing it to something Atlantean. In their intellectual racism they don’t want to admit to you and I that something distinctly African is useful and valuable, so they’ll lie and say that Vodun really came from Atlantis, and not dark-skinned Africans with broad noses and nappy hair. Ironically enough, Atlantean origins may not cancel out the possibility of people with those physical attributes.

In his obscure book Liber LI: The Lost Continent, European occultist Aliester Crowley suggests that that the very root beneath the word “Atlantis” literally means “Black Woman.” It would seem conceivable then that this Black woman could have dark skin, nappy hair, and a broad nose. The notion that the name Atlantis is simply a euphemism for the Black Woman who introduced the “magickal mathematics and physics” known as Vodun to planet Earth brings me back to a lucid dream that I had last year in the summer of 2001. It will add more clarity to Crowley's perspective…”

Somehow, I anticipate that my unguided insights from long ago will lead me on a journey to some powerful places of spiritual import. I'll have to wait and see.