Khonsu's Redemption: The Traveler has come 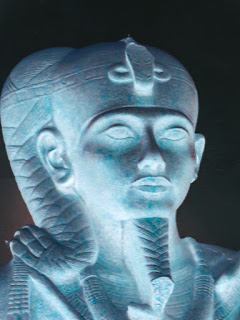 The Wave Function is the expressed ancestral memories of consolidated atomic particles coupled with all of their potential states of being from the near and distant future.

The past and future coalesce to create a single moment in time, which opens the portals of unlimited possibility, in the deepest recesses of your mind. This Quantum Singularity is represented by the serpent swallowing its own tail in Hermetic iconography.

Electrons, which are the receptive consorts of a single, central proton, are distinctly encoded with the latent potential of the entire atomic particle. The Wave Function transcends space-time by occupying the past, present, and future all at once.

These three essential ingredients form the broth of continuous movement that flavors the Trimurti of Brahma (The Creator), Vishnu (The Sustainer), and Shiva (The Destroyer) in India’s Vedic philosophy.

The icon that the global physics community uses to represent The Wave Function is what looks like the trident of the Greek god Poseidon. This three pronged fork alludes to the cycle of past, present, and future realities that The Wave Function occupies simultaneously.

Hellenic scholars will concede that the ancient Greeks borrowed mytho-poetic themes and concepts from North Africa and ancient India. This explains some of the inter-cultural fluidity we observe in their mutually shared symbols and the specific principles ascribed to them. The trident of Poseidon and the trishula of Shiva are one.

There are external hydrogen-based intelligences that stimulate the Wave Function in man. When a man activates The Wave Function within himself, we are observing him in The Flow State. If this Flow State lasts long enough, then he will generate his own Wave through the momentum he has gained incrementally over time.

Some onlookers will ride his wave, but his vigorous current will inevitably dissipate like impotent Avengers before Thanos’ bejeweled Infinity Gauntlet. The sands of time shall bury these forgotten castaways under motionless shores of mediocrity on deserted islands of meager destinies. The jeweled gauntlet of the lunar pathfinder are our priceless treasures of darkness.

The Man who is truly in the midst of his Flow State is not the Wave. He is the moon that modulates the rhythm of the ocean’s tide to generate Waves for other career Wave Riders. He is the cause, not the effect. He evokes strong emotions of lunacy from others, but does not experience these destabilizing emotions within the fibers of his own being.

Fools who don’t know any better will look at the surfers riding the crests of aquatic steeds and mistake the observable effect for the hidden cause because they only venerate what they see within the experiential seas of human endeavor. Meanwhile, the minority, an elect few, understand that the sublime, unassuming, pathfinder in the Air is generating waves for gnarly surfer dudes to ride.

These written lines are tidal waves of bioluminescent thought. Keep your eyes on the skies. The Traveler has come.