Eye on the Throne 4: Confessions of Fire 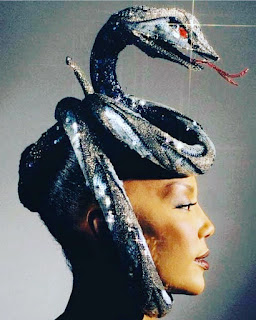 Within the name of this forbidden fruit we find an interesting character: the “Naga,” which is the Sanskrit word for “Serpent.” The Nagas of Indian and Southeast Asian mythologies are extravagantly adorned beings who are half serpent and half human.

The mysterious, all-knowing, serpent woman behind the portable screen in the Eddie Murphy movie, The Golden Child, is arguably our primary reference point for a Naga in popular culture. Nagas have insight over the past, present, and future. They grant prosperity to those whom they serve. Who exactly do they serve, though? They serve those who adhere to the principle of providing others with good Service. The Naga are often found near natural waterways.

These serpents of wisdom are not talkers, but they are very effective communicators. They are the Buddhist and Tantric equivalent of the Islamic “jinn,” those pre-Adamic beings who come from a smokeless fire. Extremely hot peppers, like the Naga Bhut Jokokia, is an edible form of smokeless fire. Eating hot peppers requires an ability to withstand the intense burning sensation to get to the distinct flavor behind the burn. 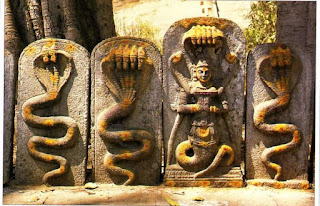 Some people say that they don’t like spicy food because the burn drowns out the flavor in their meals.  While this assessment is understandable, it isn’t exactly true. Hot peppers actually ADD flavor to your food, but you would have to have enough mental stamina to withstand the burn, and then go beyond it, in order to taste this flavor. It’s like the unforgettable kiss of a beautiful dark chocolate princess that you can only receive once you’ve slayed the fire breathing dragon that stands between you and her. 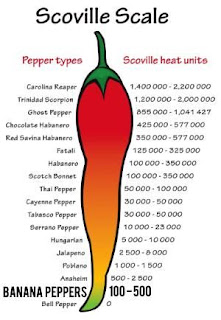 The element of fire has burned its way into the earliest stories of my life. It all started when I was about a year old. My mom was cooking in the kitchen while holding me. She looked at my face and saw that I looked tired. Then she randomly looked at my left hand, which is the hand that I write with, and saw that it was on fire. She was immediately startled in large part because I never screamed in pain, or so much as made a sound. I was just chilling in her arms with my hand on fire. I was your typical toddler.

My mom put the fire out, and immediately rushed me to the hospital for care. You can still see the burn on my left hand if you look closely today. I take this as a symbolic foreboding of how my spiritual life story, my own mythology, has unfolded. Persevering under unfavorable circumstances only to thrive in the end has been a familiar theme for me.

Patient people with drive and intention are able to endure suffering in pursuit of a bigger goal that awaits them just beyond their temporary discomfort. They don’t tap out of the Camel Clutch at the first hint of pain. The agony pales in comparison to what this competitor has the power to obtain. Unless a person is patient and in control of their emotions, they probably would not have great success working with the jinn. They probably won’t like their food too spicy either. That’s a joke.

The jinn will literally drive people who are naturally hot tempered and quick to anger crazy. Power over the jinn is essentially power over your own primal emotions. Having power over these emotions  does not involve suppressing them. It involves actually dealing with them as you would deal with the unpleasant burn of a hot pepper. I have my own perceived limits, but I’m working on expansion. Your spiritual power is measured by the amount of Scoville Units that you can house in your heart.

Patience is a virtue, and this virtue is the basis for the King Solomon archetype. “Solomon” is actually an Anglicized version of the Hebrew name  “Shlomo” which is derived from “Shalom” which means “Peace.” A Solomonic Man is one  who can remain at peace even while standing in the smokeless fire that emanates from his own heart. He may show traces of ash, but he will not wither in the flame.

In the Bible, we are told that the mythological King Solomon had many wives. Of course he did. This is because Solomon is the central positively charged proton (projective/masculine) at the center of a circle of revolving electrons with a negative charge (receptive/feminine). Electrons are the wives of a masculine proton.

The neutron is the stabilizing magnetic field that forms around the Solomonic Man (the proton) who has neutralized his passions which he doesn’t confuse with his core self, his central identity. Through the neutron  the Proton balances it’s own projective force with the receptive  properties of the electrons to hold the electrons firmly in orbit. Together Solomon, his wives, and the jinn make up a single atom.

You cannot rationalize your way into patience. It is a natural byproduct of empathy, which is based on an inner knowing that we are all part of the same body. Where’s that hot sauce?