Just Like Us: A Perspective on The Black Panther Movie (Spoiler Alert) 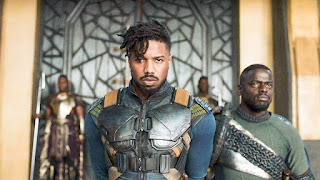 I finally saw it. The Black Panther film was very good. I liked it. The Dora Milaje—based on the Dahomean warrior amazons and the Kandake of ancient Nubia—were as beautiful as they were strong.

I balk at attempts to make Black women seem hardened and ultra-masculine in film. It’s a personal turn off for me, but I  didn’t see that in The Black Panther. I saw a familiar strength of character conveyed through femininity.

What I didn’t like was the myopic views expressed about the movie by pompous individuals who think they know shit, but in reality, are not even that bright. If you stripped them of their naïve confidence and bravado they would have nothing of intrinsic value to share with us.

Well actually, that isn’t exactly true. Projecting self-confidence even when you’re a fucking fool is a skill that ignorant people can learn from clowns. As long as the ignorant person sounds really confident, other people who don’t know shit are blind to the fact that their idols don’t know what the fuck you’re talking about. This is because the audience wasn’t taught how to think. 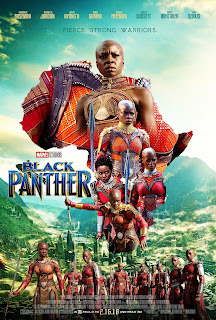 Some people  may have a little bit more knowledge than the average Black person when it comes to Black history that occurred before the Trans Atlantic Trade in Treasures of Darkness. But that’s like bragging about having a bigger disposable income than someone who calls a public bench in a dirty train station their bed. It means absolutely nothing. The treasures of darkness who crash landed on earth eons ago are now in your bloodstream. They are greater than any Vibranium Marvel Comics can imagine.

Even some Blacks who are progressive in their thinking, for the most part, are still locked into Iranian Dualism. The inhabitants of ancient Persia practiced Zoroastrianism. It is a form of theological neurosis introduced by the Indo-European invaders of the region who saw the universe as a battlefield between the forces of light, personified by Ahura Mazda and the forces of darkness, personified by Angra Mainyu.

This dualistic worldview was adopted by Christianity through the God vs Satan dynamic. Despite their beautiful geles, daishikis and ankh necklaces, a lot of conscious folks still think like European Christians with the Iranian Dualism program running in the back of their minds.

On social media I watch them try to force Black Panther film characters T’Challa and Erik Killmonger into the traditional Jesus vs. Satan dynamic. The problem is, none of these guys fit into those archetypes. These characters are neither “good” or “bad.”

T’Challa: This brother is very dignified and regal. He is very patient, but fierce and diligent. He welcomes input from those who possess ability. These are the marks of a true king. A lot of people I interact with regularly see me  inthis way. T’Challa is also a fucking asshole though. He was insistent and very proactive about saving the life of the C.I.A. agent, but he passively offered to revive his dying cousin, Killmonger. True, Killmonger preferred to die for his own reasons after the fact, but my point is that T’Challa wasn’t as eager to save him as he was eager to cape for the C.I.A. agent. T’Challa expressed anger towards his father in the ancestral realm for neglecting his own nephew. That was a critical point in the film. I loved that part. It was noble because it showed a willingness to break from the facade of traditional piety to do what is right based on universal principle which transcends national custom. T’Challa is not a good guy, or a bad guy. He’s just like us.

Erik Killmonger: A lot of Black Nationalists love Killmonger from what I can see. They see their own aspirations through him. I was glad when he threw T’Challa over the waterfall. He didn't do it quick enough for me.  Truth of the matter is that Killmonger isn’t a Black globalist dedicated to the Black man’s return to greatness. He only cares about himself, not because he is inherently “bad” but because everything he has ever gotten in life he had to take. Nothing was given to him. He inherited nothing.


I can personally relate to his relentless will and self-determination. That’s the part of me that few people see. Killmonger only talks about global Black power to forward his own agenda (sounds like those  crooks on YouTube), which is to punish the cold world that wounded his heart. He never developed emotionally beyond his childhood stage and you saw this when he entered the ancestral realm.

Let’s say Killmonger did conquer the globe and he had a son with a luscious Wakandan queen. When he got old and died, how would his son have effectively succeeded him as a Black Panther given that he had burned the heart-shaped herb? How would the mighty Black Empire have continnued into a new generation? Killmonger didn’t care and wasn't thinking about legacy or tradition because a king who had the power to improve his life as a vulnerable little boy was preoccupied with tradition—the tradition of keeping Wakanda ethnically homogenous—to uphold a fake legacy of greatness. Killmonger highlights the selfishness of the technologically advanced, yet ideologically stagnant Wakandan Empire. That is noble. Killmonger is not a “good guy” or a “bad guy.” He is just like us.

I have a lot of other observations about the film, but I won’t get into them here. I will explore some of those points of interest with people who’ve read my book, The Treasures of Darkness: Living Jewels for Spiritual Resurrection. It has some curious elements that are directly related to the film. I’m not the guy who loves to hear himself talk.

I LOVE to learn from others, but you can’t teach me if you don’t know me. I am only known by those who read my work, and I wouldn’t have it any other way.  This upholds the quality of my interactions. I’m not a “good guy” or a “bad guy.” I’m just like you.


I salute Ryan Coogler and Joe Robert Cole for writing an action movie script with no protagonist or antagonist (at least not in the traditional sense). They opened a portal and broke free from the chains of Iranian Dualism that are so prevalent in Hollywood blockbusters, presenting us with something that was more true and more real in the process.


Killmonger and T'Challa both played the roles of Heru avenging the deaths of their fathers but they weren't nice guys. Embrace complex perspectives. You will learn to see more. Third Eye Max.