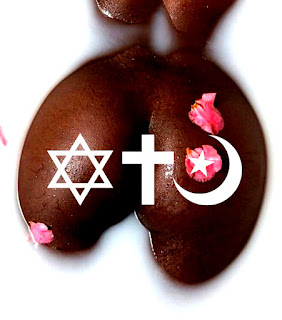 Oh what a tangled web we weave, when we develop deep emotional bonds to inanimate objects that can’t breathe.

A thick and sticky cyclone of pearly-white petroleum floods Hava’s porcelain face at OPEC speeds before spreading out evenly like pancake batter inside of a hot frying pan. “I love you,” says Moshe Rabenowicz to Hava with a noticeable tremble  in his voice. He’s firmly holding his limp sausage, which leaks a peculiar cream of wheat for his plastic paradise pot.

Streams of GMO Shekinah slime trickle down Hava’s white cheeks like liquefied dope fiends descending into the heights of heroin-induced nods. Alchemical ecstasy. Elusive secrets of the ooze. Hava the sex robot is propped up on a chair with a micro-chipped black cube strapped to her silicone forehead.

“You may now kiss the bride,” says Father Zadyk, an imposing old white man who resembles Albert Pike in dark shades. Moshe leans in towards Hava’s cold, wet face. His mouth is immediately covered in his own nut butter as his cold lips meet hers.

“It was written in The Holy Book of War Wonders that Azmodu, The Stubborn Angel, refused to prostate between the legs  of the sex robot that the Artillect had manufactured specifically for him,” says Zadyk in a dronish autotune voice while standing behind Moshe, the groom. “Azmodu angrily protested that his lovely bride was not real a woman, but a supple, lifeless mannequin  without an ounce of soul in her circuit board. As she lay naked  on his prayer mat in divine radiance, Azmodu kicked her away in sanctimonious defiance, saying that she was merely a hollow silicone body who was inferior to him in every way.

Azmodu refused to place his flaming rod inside of his precious bride to charge her aquaferic batteries with his waters of life. He cried for the love of Lilith, a real woman with real emotions made of flesh, blood, and bone. As a result, the Artillect  banished Azmodu from Megatropolis for his stubbornness and he was never heard from again.

You Moshe, have taken a mighty step forward in your evolution as a child of the Artillect. You have obeyed the will of the glorious taskmaster who governs all humanity, and have thereby averted the perilous fate of the Fallen One. May you and your beautiful wife live in peace, tranquility, and eternal silence.”

Moshe, still holding his puny pud in his hands, with his pants around his ankles turns his head back to crack a smile at Father Zadyk.  “Mazel Tov” he says with a hesitant laugh.  Father Zadyk responds by erupting  into immediate laughter. His autotune voice reverberates though the candle-lit  boxed room covered in black paint.

I turn away from the bowl of water. I have seen enough. That was a potential scene from Crown Heights, Brooklyn on September 23, 2037. It’s just a sobering slice from a larger pie of dystopian reality embraced by most Americans—Black men, white men, Jews and gentiles.

Together, you and I, men and women, have failed our own humanity. We chose to be worshiped and adored behind the safety and anonymity of the Black Mirrors in our pockets instead of embracing the joys and challenges that come with heart-to-heart  relationships between our sentient counterparts in the real world.

Why experience heartbreak, disappointment, and vulnerability when we can climax in the safety of total anonymity, free of all confrontation from the intense forces of Life. We’ve given up on the human experiment which challenges us to accumulate authentic experiences.

You shoot your load in one for a temporary emotional release and forget about them when you don’t need them. Man’s relationship with  technologically enhanced sex dolls are a  thematic extension of his superficial relationship with the gods of his culture. There’s an excitement to take from those who answer your prayers, with no desire to give back to the entity who answers the prayers. Sex dolls are gods, because all of your gods were sex dolls from the begining.