Grapes of Wrath: The Symbolic Meaning of Forbidden Fruit in World Mythology 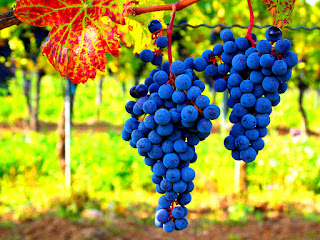 According to the mystical Twa people of Central Africa and the Great Lakes, man suffered the curse of mortality after he consumed the forbidden fruit of the Tahu tree.

Heat always rises to the top of a closed system. Insulated from the cultural barbarism of outside invaders, the theological radiance of these pint-sized nobles found its way up north to ancient Kemet where it precipitated the priesthood of Tahu-Ti. Like the Tahu tree, the netcher Tahu-Ti, is an extension of nature's innate intelligence.

The grand baboon personifies wisdom and the mental faculty of articulate speech, especially through the discipline of writing. Just as the Tahu tree robbed man of immortality, Tahu-Ti does the same through the esoteric art of writing. What do I mean by this?

The written word is only a gift to the wise, the elite, the so-called “Illuminati.”  However it is an undetected burden to a fool. The poetic beauty of carefully curated words can seduce a reader into believing that they actually know everything that the writer on a given subject knows simply because they have read what the writer has constructed for their edification on a page.

Although we may desire immediate knowledge through the convenience of reading, we are sometimes better served through the delayed gratification that comes with direct, first-hand experience in what we are interested in reading about over time.

The Dogon clan of Mali taught us about the four layers, the four aspects, of the word. You have the Giri So (front of the word), Bene So (the left and right sides of the word), Bolo So (back of the word) and the So Dayi (clear vision that brings the past, present, and future together in oneness and unity).

In order for us to  truly penetrate the meaning of the So Dayi we must have a personal frame of reference for the jewels given in the written message. Otherwise the word becomes a box, a casket, that we are placed in, buried, and left for dead.

The ability to grasp the So Dayi in not just the word, but in all things, makes man qualified to eat the forbidden fruit. If this fruit were not forbidden by an external intelligence, would man have enough humility and a strong enough inclination toward self introspection to even question whether or not he was qualified to eat it? Only if possesses the clear vision of the So Dayi.

When we turn our attention to the ancient Mayan cosmology of the Popol Vuh we learn that the underworld lords prohibited man from eating the fruit from the sacred Tree of Xibalba (Xi-Baal-Ba). According to the Mayan text this life-giving tree sprouted from the decapitated skull of a great man by the name of One Hunahpu. His name translates to mean “head spirit of the mountain.” In this context the head denotes the cranium, while the mountain is a reference to the pineal gland which is a throne for the Third Eye.

The fact that a sacred fruit-bearing tree sprouted from a man’s cranium is a critical detail of the Popol Vuh story that cannot be overlooked if we are to understand its spiritual import.

A man’s skull encases his thoughts, and when we consume the fruit of an extraordinary man’s thoughts and ideas before we have the prerequisite experiences needed to process them correctly, we do ourselves more harm than good. His words may float like a butterfly and sting us like a bee because they are honey to the tongue and hydrochloric acid to the belly. He comfortably sits on the throne of truth, whereas we struggle to occupy its periphery.

To get a deeper understanding of the problems we cause ourselves and the world when we fail to effectively assimilate wisdom into our souls I recommend that you watch the Transformers Generation 2 episode “The Hardest Burden to Bear” which is embedded above. It is truly a classic series with profound spiritual messages. You will often see this in the popular cartoons of the 1980s if you watch them again as an adult.

Every page in a beautiful book is the sweet flesh of a sacrificed tree. We foolishly consume that tree’s fruit when we seek the juicy nectar of the pen before our minds are ripe enough to receive  it.