Fire & Water: The Future of Popular Black Music in the "Aquarian" Age 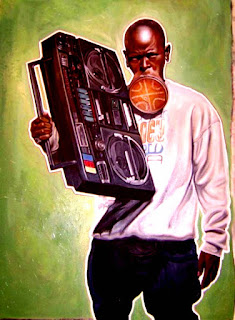 The first rap song that I ever heard was “AJ Scratch” by Kurtis Blow. It  was playing on the radio over my parents’ living room sound system. I’ll never forget it, because I thought that the music, and the hook in between the verses, were so UGLY.

At about 5 years old, I was introduced to a sound that was far more base, and far more primitive, than the melodic tones of Gregory Isaacs, Jacob Miller, Dennis Brown and other reggae artists I was raised on. Although I grew to appreciate it in my teens, I didn’t like the rap music of the early 1980s. It sounded like cave man music to me with its drum machines and minimalist approach with stripped down beats.

Big Daddy Kane got my attention in the late 1980s with songs like “Set It Off,” and “Smooth Operator.” I also liked “Fight the Power,” by Public Enemy.

However I wasn’t actively checking for music, much less anything that resembled hip hop, until 1990 when Bell Biv Devoe’s “Poison” and MC Hammer’s “Can’t Touch This” ruled my summer. I was 11-years-old.

From there my older cousin, who used to crack on me for listening to MC Hammer, introduced me to a universe of bona fide artists like Special Ed, EPMD, Ice Cube, Brand Nubians, Lord Finesse and countless others.

Within a few years of my Great Awakening, I started to see the music lay siege to the Billboard Music charts through acts like Dr. Dre, Snoop Dogg, Naughty by Nature, Nas, Tupac, and Wu-Tang Clan. The shoguns had arrived to silence the critics who had long argued that rap music was a passing fad that would inevitably disappear into the dark night of public indifference.

Some people feel that rap music, which is the defining art form of hip hop culture for so many,  is on life support because those who are currently identified as its most popular acts are not lyrical shoguns like Kool G. Rap, KRS One, or Rakim. What I honestly find most amusing about this critique is the fact that none of these younger artists, to my knowledge, have ever claimed to be rappers, much less be the reincarnation of any of the aforementioned lyrical greats.

They’re ASSUMED to be rappers because they are generally young Black men from urban areas who wear jewelry, display the same mannerisms, use similar slang, and favor forms of fashion comparable to your classic rapper.

My question to you, the reader, is do these elements necessarily make these young brothers rappers? Is curry chicken the same as curry goat because both are made with curry powder, salt, peppers and onions?  Yeah, these new guys you hear teenagers listening to are rhyming over music, but so was Bob Dylan back in the 1960s. He isn’t a rapper though. Neither were The Last Poets.

The INTENT behind Dylan and the Poets’ music is different from Jay-Z’s or Mobb Deep’s. I’m not talking about the subject matter, either. I’m talking about the very markers that allow us to determine, beyond reasonable doubt, that the artist is highly efficient at what they do. In order to objectively determine whether or not someone is effective at what they do the INTENT behind their actions must be crystal clear to you. You must know their established goal.

What are Desiigner’s intentions when he goes into the studio? You said to sound like Future? Haha. You’re too funny!!!  All jokes aside, The Last Poets said some fly shit, but they weren’t trying to RIDE THE BEAT with their rhymes. A rapper is one who RIDES THE BEAT WITH THEIR SPOKEN WORDS AND TONAL INFLECTIONS.

But what do you call a recording artist who  fluidly rides the beat with vocalizations that are not exactly words? Is he still a rapper solely because his performance involves the use of skills that are applicable to rapping (such as bioglyphics, which are the hand gestures used as a guide to help get the lyrics out on beat), or is he something entirely new based on his intentions which clearly differs from a rapper’s?

Is jazz great Al Jarreau wack because he didn’t “make sense” when he was scatting? Please watch the educational video below before you dis Kid Kudi or Young Thug about their preferred style of vocal delivery. The African mind sees similarities before differences.

Guys like Future, Fetty Wap, Young Thug, Desiigner and others boast about getting high, increasing their finances, and living lives of luxury as many rappers have. However, they’ve never directly aligned themselves with the code of the rap samurai who lives for the thrill of the battle while brooding over the wordplay in their verbose poetry.

When I listen to Future on “Maybach,” which is a great song, I hear an African American artist with a heavy southern drawl doing an incredible job of composing Jamaican dancehall music, which is the most unapologetically African of all the contemporary music genres of the western hemisphere. “Fuck Up Some Commas,” is African American dancehall with a dirty south slant on it. I like it.

The Jamaican dancehall deejay places a greater emphasis on feeling and vocal flow than cerebral wordplay. This is why when you look at all of the great rappers who are of Jamaican descent (Heavy D, Busta Rhymes, Notorious B.I.G., Slick Rick), they all have impeccable cadence. They grew up on classic dancehall. As a writer, I prefer rap music to dancehall in most instances. It gives me more inspiration for what I love to do.

No one in the history of dancehall is fucking with Nas or Ghostface Killah when it comes to utilizing the power of vivid words. At the same token, none of those classic rappers can shut down a dance or get women excited and moving like Shabba Ranks or Beenie Man can. I love what all of these artists bring to my ears. Variety is the spice of life.

The astrology Nazis keep telling us that we’re entering the Age of Aquarius, the age of the water bearer. Some of them will even crucify the young recording artists of today for plotting their own path and not trying to be the next Chuck D in skinny jeans. But what does the Age of Aquarius mean for the imminent future of Black popular music?

The self-righteous astrologers can’t tell you because they don’t really know. It means that your power as a recording artist to connect with millions of people will be based on your ability to touch their EMOTIONS before stimulating their intellect. The majority of the human body is made of water. Your vocalizations must sacrifice some of the fiery verbiage of the cerebral cortex in order  to stir the water body of the masses through windshield wiper flows and melodic cadences.

If yo’re talking about straight bars, Notorious B.I.G. was FAR more talented than Tupac ever was. He had an assortment of flows (“Notorious Thugs” doesn’t sound like “Who Shot Ya?”) and his wordplay was far more nuanced and intricate than Pac’s. Big is a rap god!!! His legacy is undeniable!!! However Tupac is a bigger cultural icon, and in my opinion, made more powerful MUSIC than B.I.G!!! There’s a reason why Tupac is more powerful and the reason has already been explained.

Liquid fire is the future. The musical greats who have yet to emerge will burn you while making you wet.