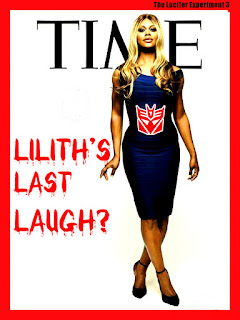 “God created MAN in his own image. In the image of God he created him. Male AND female he created them.” – Genesis 1:27

The genetic modification of Mother Earth is a theme that I explored in my 2014 fictional work, Voices of the Dawn. While that book of modern mythology incorporates other ideas and concepts into its colorful storyline, there is a central focus on man’s seemingly increasing desire to embrace the most unnatural expressions of the feminine principle through technology.

Genetically modified crops extracted from Mother Nature’s fertile womb have flooded supermarkets and fast food restaurants across the United States. Meanwhile, when we examine the current sphere of human affairs we see a steady increase in butt and breast augmentations among women of all races, economic backgrounds, and ethnicities. Nothing that is natural is “perfect” and nothing that is “perfect” is natural. What is natural is being re-contexualized as a problem to be fixed and corrected through man-made technology.

Although it is a very subtle facet of today’s popular culture, a growing number of young women are taking their fashion cues from transgender men. These men are so eager to embody the natural beauty of the feminine form that they extend this beauty beyond its natural constraints via extensive makeup and physical enhancements that push beyond the boundaries of the bizarre and unthinkable.

In essence, the transgender Transformer exemplifies the most superficial aspects of femininity as seen, understood, and appreciated, through a MAN'S eyes, not a woman’s eyes. The trangenders aren’t women. Yet they are apparently close enough for those men who do not value femininity in its most natural, most original, most complete human form, which is an empathetic Black woman with natural hair and very little makeup.

Within the next decade, Black women who insist on always wearing tons of makeup, permed-out wigs, and Indian hair weaves will be competing with transgender Decepticons to capture the interest of would-be male suitors. The reason why these women specifically will be facing stiffer competition is because the kind of man that they will attract are chasing a personal ideal of physical beauty that can only be fully realized by a transgender Decepticon who is trying to capture an IDEA of femininity. This idea of feminity is different from true womanhood which is beyond his scope of understanding.

Whether you realize it or not, there is a war on masculinity going on in the United States. Its primary target is Black men, who as a collective, have been the standard of masculinity for the world for ages. Gay Black men who lack the mental fortitude they need to assert themselves as men may see transforming into a transgender as a viable option for escaping persecution. In the near future you will see big stories involving Masculine Black male celebrities exposed for cavorting with trannys which will bring the transgender agenda into deeper focus as a national discussion.

Instagram is being used as a social engineering tool to promote this transition in national culture from the natural to the unnatural. There may be an Instavixen on Instagram with a small waist, a fat ass, juicy thighs, and ample breasts but they may actually have a bigger penis than most of their heterosexual male admirers. Watch the Breakfast Club interview below.

However the admirers don’t know that they are actually salivating over a Decepticon who possesses “more than meets the eye” because he isn’t flashing it for them to see in plain and open view. The heterosexual admirers are responding to what APPEARS to be a female form, not a male form. They only see the female that the Decepticon is showing them through visuals, but they know nothing about the man he was born as.

On the flipside, you may see an actual woman in the street, in a grocery store, or on the train, who does not have much of the physical attributes of the Decepticon, but she radiates a feminine beauty that resonates deep within the male psyche because she is a direct and true expression of Nature's intent. The sensitivity that a masculine man naturally has allows him to sense and connect with the natural feminine energy that only THIS woman has. This ability that a masculine man has to tune into and lock into the REAL feminine frequency is what is  under attack in the United States.

A lot of the men who still have their divine instincts intact are turned off by many American women, or rather, their Liberal Feminist minds which have turned them into trangender men living their lives as women. Those who actually read sociological books and journals know that there are two dominant schools of thought within the feminist ideology: Radical Feminism and Liberal Feminism.

Radical feminists seek to undo the evils, not the virtues, of patriarchy to restore Ma’at (cosmic balance as it is understood in ancient Kemet) between the genders. Liberal Feminists are women who aspire to strap on a prosthetic penis and violently fuck Mother Nature in the butt like the Anglos have been doing for the last 200-plus years. The Liberal Feminist does this in the name of “gender equality.” The men who not only tolerate, but embrace, women who are liberal feminists as lovers will be the same ones hunting down the transgenders for sex because they possess the same soul as their Liberal Feminist lovers, but operating in two different human vessels.

If you think that I’m delusional and I have no idea what I’m talking about, I challenge you to come back and read this entire article seven years from now. I’m certain that it will make more sense to you then, than it does now. Some people reading this will say that evil men are pushing this agenda but is this really the case?

Very recently I was having a conversation with my dude Ultra-Violent Beethoven who offered a powerful perspective on this matter. He explained that Mother Nature is the ultimate expression of womanhood as a living principle.  A woman’s true beauty therefore lies in her ability to mirror the principles of nature which she was intended to be a reflection of.

Here’s something I would like you the reader to think about. Which presidential candidate in the United States would be the best psychic host to the malevolent intelligence being described in this post? Scorpio is a zodiac sign of TRANSFORMATION, but within the context of this particular conversation, what kind of transformation is taking place here? It would seem to be the transition from the organic to the artificial.

A lot of women in America are being manipulated by a cruel feminine intelligence with masculine aspirations of conquest. They falsely believe that they are marching toward socio-political empowerment through the effeminization of men and the concurrent masculinization of women.

Women who fall for the Liberal Feminist agenda are actually sealing their own doom. Keep your third eye open. We are living in interesting times.