Twa Babies: The Rise of Global Synergy in the Midst of World War 4 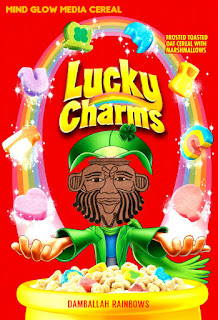 The Leprechaun is an Irish interpretation of a group of nature spirits known all throughout the African continent. Bes, the Kemetic netcher (personified expression of nature’s intelligence) is probably the most recognizable example of these beings outside of shamrock land.

Since gold is compressed hydrogen from the sun, its presence at the end of a rainbow represents  the fall, and subsequent condensation, of the visible light spectrum into dense, solid matter. The leprechaun at the end of a rainbow was originally the African guardian of nature who grants man the ability to transform an immaterial idea into a tangible reality with remarkable ease.

In the empirical science community such related concepts are being explored by a growing number of astronomers through the Rainbow Gravity Theory. This theory proposes that our physical universe has no absolute beginning or ending, but is in fact a conglomerate of color-coded energy frequencies that spiral out into infinity.  The rainbow of Irish cosmology isn’t necessarily about chakras although that’s the automatic assumption that many people who dabble in occult philosophies make. After all, everything multicolored must deal with chakras, right? Wrong!

When you do a comparative study of world mythology you find that ancient people were often talking about the same ideas, using the vocabulary of their respective cultures to  convey  universal themes. However if you assume that this was ALWAYS the case then you’re making a mistake.

The rainbow may not carry the same symbolic connotation in West, Central, and North Africa, that it had in ancient India. Therefore you cannot assume that the people who live in Ireland—which incorporated elements of African culture in ancient times—are talking about chakras when they incorporate rainbow symbolism into their mythologies.

Let’s expand our cosmological palettes to consider other explanations for things that are beyond microwaveable consciousness's cultural frames of reference, which are always in a pre-seasoned, pre-cooked, ready-to-eat format.

People who jump into metaphysics without a broad overview of world history and cultural anthropology are lazy decoders who force concepts together that really do not have a connection. They highlight the apparent, while ignoring the subtle, yet more important, cultural nuances of an idea or concept. “Negus” in Ethiopia means “King.” A Naga in Central and East Asia is one who has accumulated profound spiritual wisdom. One may reflect the fundamental qualities of the other, but to say that a Naga and a Negus are virtually the same is incorrect.

Also, students of the life sciences who are of African descent may want to consider the study of history and cultural anthropology for its own sake, instead of arduously searching for the African presence in different world cultures all of the time. In doing the latter, we actually fail to identify the inherent African cultural DNA in non-African societies. This is because we get caught up in looking for Black faces instead of looking for the reoccurring thought patterns behind those Black faces.

I personally find some aspects of ancient Germanic mythology and folklore quite fascinating. Last year I learned that the term “knock on wood,” comes out of the old Germanic belief that trees were populated by dwarves who have the power to grant people good luck and offer them protection from curses or physical harm. Similar views are shared about magical little people who are intimately related to the Twa throughout Africa.

To go even further, we can examine a quote from the book, Faust, by Johann Wolfgang von Goethe. In this classic work of 18th century German  literature we read:

“Once you know the stars’ procession, and Nature is your guide and master, when spirits speak to spirit, your soul will then unfold its strength...”

The quote above summarizes the true essence of traditional African spirituality. In your quest for knowledge don’t just read “Black Books” that are marketed to you. Read GOOD BOOKS that define the classical output of world cultures. You will see your own reflections in those mirrored pages because you descend from the original architects of high culture. At different points in antiquity this culture was dispersed throughout the four corners of the earth. Now it lies at the heart and soul of Earth’s global culture.