The Political Fiction of "White Supremacy" & The Media's Power of Depiction 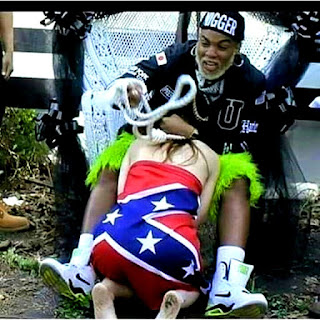 “The media is the most powerful entity on the earth. They have the power to make the innocent guilty, and the guilty innocent, and that's power. Because they control the minds of the masses.”
-          Malcolm X

“White Supremacy” is a political fiction. If it were real, it would not affirm itself so frequently and so aggressively in the absence of a legitimate challenge. But there is a legitimate challenger to the perception of white dominance. It’s called the truth. The system that has commonly been identified as “White Supremacy,” is in truth a malignant inferiority complex which has metastasized within the body politic of minorities across the globe who identify themselves as  white.

The initial symptom for this diagnosis of the White Male Inferiority Complex was the violent suppression of white female sexuality at the onset Europe’s Christian era. White Supremacy is a man with 73 years behind him, flexing his flaccid biceps in the mirror with a prosthetic penis bulging from underneath his speedos.

“White Supremacy” is a media term designed to assume itself into our daily reality through careless repetition. The rusty downstream media calls groups that are Black Supremacist in ideology “Black Separatists” or “Militants” because to identify them as they are would give power to the mere notion of Black Supremacy.

That’s a scary thought for someone who has been shielded from honestly examining their  inferiority complex through several generations of stolen privileges. This sense of inferiority that many whites have may prove to be unfounded, but white America is afraid to find out for certain by relinquishing white privilege.

It goes without saying, that Black America must exercise its unalienable right to self-determination. Whether or not many of us will strive to do so in the United States is something that remains to be seen. What I do know, is that we can no longer afford to be content with these meaningless and petty symbolic victories we go after as a direct response to racial hatred and injustice. Black people in America have already secured the greatest symbolic victory it will ever receive in the election of a Black president who has served the better part of a decade in office.

Eradicating the Confederate flag from public view will do nothing for us. All it does is conceal the identities of potential enemies who might otherwise be out in the open. Besides, the confederate flag is no more of a symbol of institutionalized racism and oppression than the American flag is. Did the Southern Confederacy plot to sabotage Marcus Garvey’s U.N.I.A movement and succeed in doing so? Did they initiate the Tuskegee syphilis experiments that destroyed the lives of numerous Black men? What role did the confederacy play in the assassination of Dr. Martin Luther King Jr. and Malcolm X? The U.S. government orchestrated all of the above.

Let’s not be cowards in our political activism by going after the low-hanging fruit and the vulnerable bully while ignoring the elephant in the room that has historically committed some of the most heinous crimes of racial hatred against Black Americans, post reconstruction era. A pole dancer pulling down the confederate flag is nothing to get excited about. As soon as Black America started asking itself the really important questions after the Charleston South Carolina shooting, the downstream media distracted it with the irrelevant confederate flag “controversy” and many of us fell for it.

By the way, I loved the TV show Dukes of Hazard as a child, especially the car with the confederate flag on it. Maybe media mind control has influenced me and my stance. All jokes aside, I believe that there are more important national issues for Black people to focus on. Besides, the stars and bars were adopted by Freemasonic southerners who stole the iconography from the Blacks who founded ancient Egypt. These southerners took a symbol of resurrection and made it synonymous with racism. But that’s another story for another day.

We can’t just be passionate about our plight in the wake of tragedy.  We have to live our lives in accord with these serious concerns on a year-round basis. Our progeny will depend on it. Economic solidarity is critical. Every Black person in America should be going out of their way to support and promote sustainable Black businesses with mutually beneficial profit motives. We must put our money where our mouths are or die. These words are not written to offend, they are written to inspire our people to ascend. Until we understand the power of words and the purpose of media then we will continue to sing the blues in exchange for cathartic social media fraternizing, which is primarily instigated by the downstream media.

The words in our heads generate images. When we focus intensely on these images we generate spirits, energetic units of intelligence that are mirror reflections of the imagery that brought them into being. Do these spirits assist you in your goals and aspirations? A lot of it depends on the images you focus on, but those images are often conjured up by the words that you entertain in your head and speak out loud to others.

The media’s power lies in its ability to seduce minds through the weaponization of beautiful words and images as a means of methodical persuasion.Those who magnify Venus’ influence on their personal magnetic fields will be granted access to human consent.

The Olmec Calendar was fashioned, in large part, from a careful observation of the cycles of Venus. A calendar is an umbrella that you can gather a nation under to shield it from the torrential showers of individualism which scatters collective focus. Those who convince a nation what it will focus on determine how that nation is defined. They mold the soul of that nation.

The new umbrella is media. Like the calendar, media sets the pace and tone for the movement of human consciousness within the scope of space and time. The broad-nosed, big lipped brothers with the large stone heads gave us a template to run with. Where are our track shoes? Beauty is in the eye of the beholder. We’re standing in seven with our eyes on six. That’s beauty.