The Akua'Ba, Ancient Aliens & The Wise Wombs of Redemption 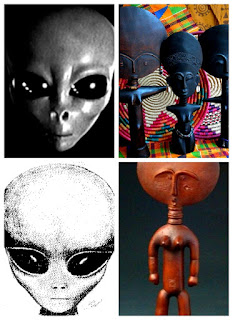 In West Africa, more specifically among the Ashanti people of Ghana, some women wear Akua’Ba dolls tucked into the belts of their skirts as fertility charms. The Akua’Ba is also believed to protect pregnant women’s wombs from unwanted external influences that may threaten healthy child births. It’s kind of ironic that many alleged alien abductees in the New Age community describe their supposed abductors as looking very much like these Akua’Ba dolls. Some have even said that these alien captors have tried to sterilize them.

I think that it is not only plausible, but probable, that these men and women—who are usually of European descent—are actually experiencing the effects of old DNA programming from centuries passed. When they go to sleep at night their preconscious minds process these genetic changes as “alien abduction” nightmares.  However, what is actually happening is they are feeling the effects of a biogenetic, species terminus alarm that was scheduled to go off in their DNA.

Since there is a subconscious awareness among some of these men and women that this alarm was preset by the descendants of extraterrestrial Scientists who  came out of—but are not from—West Africa, they are seeing their big-headed alien manipulators in dreams as Aku’Bas, who are “Holy Grail” guardians familiar to that part of Africa. The Akua’Bas only appear to be “Greys” because they are being seen through atrophied pineal glands.

In Ghana, these fertility guardians are among the many artistic depictions of the Adikanfo, those Black men and women with almond-shaped eyes who came to Africa from beyond Earth’s atmosphere in the distant past.  Unless you trace your earliest family roots back to the Neanderthals, then you are NOT indigenous to any landmass on this planet. You are actually a direct descendant of The Visitors. Although I understand and respect the importance of certain legal classifications for commercial purposes, we must never loose sight of the bigger picture, lest we lose our TRUE identities and forget where we really come from.

The bigger picture is that there is no such thing as an “indigenous Moor.” That would be like saying “indigenous extraterrestrial,” because one cannot be both. EVERYONE who GENUINELY comes out of a Moorish bloodline has extraterrestrial ancestors. Real Moors are universalists who aspire to touch the stars. They do not have a spiritual connection to any one landmass on Earth because they know, even if only subconsciously, that they are not from this planet. 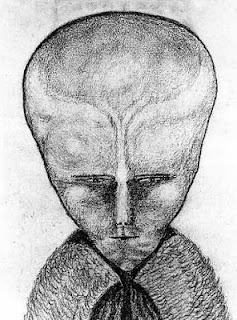 Aleister Crowley, the entertainer and double intelligence agent who is somehow revered in serious occult circles as some kind of sage, wrote about making contact with an Akua’Bic pre-human entity whom he called Lam. Although I question Crowley’s credibility as a true occultist in the grander scheme of things, I think that he had a genuine psychic breakthrough which terrestrials have from time to time. Crowley touted Lam as a herald of the coming Age of Heru (Horus).

Those who are familiar with ancient Kemetic mythology know that Heru is the child of the pregnant mother goddess, Auset (Isis) who is often seen holding an Ankh, which looks like an Akua’Ba doll. It is far from a coincidence that both the Akua'Ba and Ankh are fertility symbols. Many people who try to Christianize Kemetic mythology would have you believe that Heru is one man who will redeem the planet and its people and rid the world of evil and ignorance. 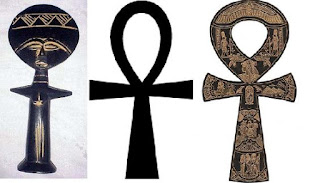 An Akua'Ba doll and two Ankhs

However, Heru is actually a metaphor for a group of men who will receive the Heru Hormone, which is vaginally secreted by select Black women once they engage in sexual intercourse with select Black men. This bodily secretion can increase a man’s penis size like a male enhancement drug, and improve his mental focus like lithium orotate once it is consumed through oral sex.

The more that the man sincerely enjoys eating  pussy, the more potent this vaginal extract will be once it is secreted. The Heru Hormone can only be produced if the man and woman share a deep and abiding love for one another. This love must be mutual and it cannot be faked. It either exists, or it doesn’t. The Heru Hormone is a biochemical intelligence that cannot be fooled by deceivers.

Lam was Crowley’s distorted perception of a Holy Grail guardian. We know this because the name “Lam” is actually a Tibetan word that means “Path.” This is where old-school newspaper journalists got the term when they say things like “the criminal suspect is on the lam.” The lam would be the alleged criminal’s path of escape from law enforcement. In this context, however, the path being referred to is the vaginal canal, which is the Holy Grail.


Crowley’s Lam, who was an early personification of the Heru Hormone, is also the basis for the Marvel comic book character The Watcher, from The Silver Surfer. Galactus, the devourer of planets that are rich in natural resources, is the personification of a Black woman’s vagina which devours black penises throbbing with life and vitality only to leave them limp and lifeless. Galactus is beyond the polarity of good and evil, but so is a hungry vagina. The Watcher, who represents the Heru Hormone, always appears when Galactus is about to consume a thriving planet because he is the product of vaginal stimulation.

You are Stellar Men and Women. The stars that you see in the night sky are merely the afterglow of who you once were before coming to this planet years ago. So bright were you that time has yet to completely extinguish the light of your past greatness. And it never will, because even in your fallen state, you are the celestial fire from which that light originally emanated.