Sexy Solar Showers in the City of A God 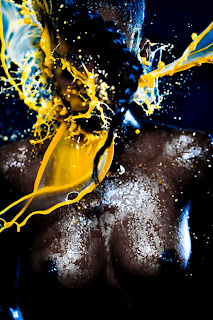 An all-day sucker is a blow pop’s dream, and a concerned mother’s worst nightmare. A newborn morning was about to be delivered by the pregnant possibilities of a new day. Still, this didn’t stop Chupar from treating her mom like an ancient Moor from the movie, 300. Ms. Cabral’s increasingly nagging phone calls were banished with complete indifference to the bottomless pit of Chupar’s voicemail.

A meddling, overbearing mom who made it her business to question her  only daughter’s life decisions was much more than Chupar was willing to deal with today. After all, she felt that she was a mature adult who was responsible enough to run her own life and make her own decisions.  Her mom often accused her of being selfish, but that wouldn’t stop Chupar from putting herself first today. This entailed devoting herself to Ra, and leaving humanity behind.

It was 6:05 in the morning on December 21st, 2012. Chupar took personal pleasure in watching Ra rise slowly above the horizon of her nervous anticipation. The eyes are windows to the soul, and it had been several moons since Chupar’s had been illuminated by the Sun of Man.

As she stood on the balcony of her beachfront home with her eyes tightly closed, Chupar felt her entire face heating up. She extended her tender arms outward with open palms and then raised her head until her face pointed towards the sky. Chupar’s black window curtains turned red upon receiving the first rays of the new day’s sun. She wanted firsthand knowledge about what awaited beyond the bright crimson screen that obscured the rush of her anxious moment.

Chupar slowly raised her vibrant curtains that were elegantly decorated with long, plump eyelashes and aqua blue eye shadow. The sun maiden was greeted by a coronal mass ejection of epic proportions. In just one instant, Chupar’s entire face was engulfed by a glowing mask of white gold. Her heart raced with speechless euphoria as the earth trembled beneath her knees.

The hardened Hershey’s Kisses that protruded from Chupar’s massive mocha titties tingled with animal excitement. Her beautiful face bathed in the vivifying energies of solar plasma that was meticulously encoded with advanced knowledge of the known universe. The smooth, golden brown lips of Chupar’s pulsating vagina welled up with creamy colloidal silver at the thought of the gift that Ra had given.

Drunk off the peculiar wine of solar-sexual ecstasy, Chupar squeezed Ra’s fire-breathing Uraeus with her tiny right hand. The pressure created by her tight grip caused blood to flow straight to the serpent’s head, which made its hood flair with suspense. Chupar slowly leaned forward and gently kissed the serpent’s mouth with her juicy lips, which were liberally glazed with the sticky nectar of heavenly tangerines. While peering deep into Ra’s eyes Chupar sang to him. She said

“Excuse me sirrrrr
Rain down your pearls

The sun god responded by inserting his One Hunahpu into the creamy galactic center of Chupar’s pink Hunab Ku. After just a few minutes of foreplay, she was ready for Ra to thrill her and “Beat It” it like he was MJ. Chupar’s body temperature rose rapidly as Ra’s Olmec stone head plunged deep and relentlessly in between her thick, sinewy legs, which glistened with fragrant body oils and the perspiration of desperation. 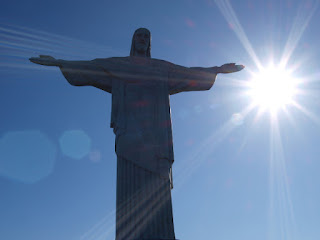 Ra didn’t thrust too fast. He didn’t thrust to slow. He gently stirred her sugar pot with his nine inch bone. Chupar’s blood was flame broiled. Its pressure shot up like a rocket. Ra hoisted her legs over his shoulders and pounded her skeletons out the closet.

“What a beautiful, strong man you are,” Chupar sighed into Ra’s right ear as she reached around his broad shoulders and dug deeply into his back with her long pastel-colored fingernails. “You want to mash my vatapá, papai? You want to butter my muffins, honey? Shower me with all of your love, acúcar. I need that fire like Richard Pryor. Beat this naughty Portuguese pussy, up. Make it retire!”

The Brazilian beauty from the state of Bahia was nobody’s slow poke. She rhythmically tightened her tender twat when Ra came up for his down stroke. The god dipped into the pink slip tucked beneath her waist and hips. “Make this pussy retire,” Chupar again demanded, as her massive breasts and beautiful bunda shook violently from Ra’s unbridled thrusts of passion.

The god and his flame were jamming like Bob Marley on a bed made of bread smothered with Smuckers. Chupar was a shapely work of art who had been genetically consecrated since adolescence with a full-blown African bottom. Not only was it exceedingly soft and fluffy, but expansive enough to hold a workman’s load like a caterpillar dump truck. On top of that, the Cattleya Labiata’s candied cocoon was a sacred space that cloaked the magic of a juicy chrysalis that made Ra’s hot butter fly.

“Esu Cristo!!!” Chupar exclaimed breathlessly as she stared at her own solar plexus, which just happened to be the site of Ra’s explosive sunburst. Chupar’s cratered navel had been converted into a pearly lake of solar fire and she wouldn’t have had it any other way. “Our love is glowing, papai. Please, make it glow brighter. Rub it into my tummy with your magic rod that lights the heavens and breathes the fire,” Chupar said. And Ra did just that, until his magnanimous sun set.