This morning I was listening to one of my favorite singers, Chaka Khan. The song blaring from my speakers was one of her  classics, “Through the Fire.” Although the song has been a favorite of mine for years, it suddenly took on a new meaning for me this morning.

As I listened more carefully to the song’s lyrics, it brought me back to the ancient Sumerian story known as “Inanna’s Descent to the Nether World.” For those who are not familiar with the myth, the goddess Inanna—who was known as Ishtar to the Babylonians—made an extremely dangerous journey to the underworld to rescue her lover, Tammuz.

The Jews, who were allegedly held captive by the Babylonians during the sixth century B.C.E., named all of the months in their calendar after Babylonian gods.  On the 17th day of Tammuz, many Jews fast from sunrise to sundown. In Babylon, Tammuz was worshiped as a sun god. It is believed that the Hebrews made a golden calf on the 16th day of Tammuz while Moses was on Mount Sinai. The golden calf was dedicated to the ancient Kemetic netert (goddess) Heru Het/Het Heru, who would correspond to Inanna if we were looking for her in the Sumerian pantheon of deities.

In an effort to rescue her lover from her evil sister Ereshkigal, the ancient Sumerian Morning Star descended from heaven all the way to the lowest level of the netherworld which is divided into seven levels, each of which are separated by gates. As Inanna passes through each gate, she is robbed of one of her precious jewels and royal garments by one of the shadowy guardians of the netherworld. 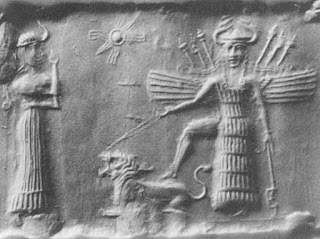 By the time Inanna reaches the seventh level of the underworld she has been stripped completely naked of her royal vestments. All of the reminders of the goddess’ material wealth and divinity were violently taken from her by force.  The goddess of love, war, beauty and fertility was forced to bow before Ereshkigal and the Anunnaki judges of the netherworld. With their evil gazes they turned Inanna into a corpse right before they lynched her. However the god of wisdom, prince Enki, arranged for her rescue and revival through his masterful use of magic.

Inanna subsequently frees all of the spirits trapped in the netherworld and leads them through the streets of Sumer. What happens after they hit the streets is unknown since the clay tablet that the story was recorded on broke before it could be translated by archaeologists. Fortunately, we are all free to write the ending of the story for Inanna, because her story is our story and we are the authors of our own lives.

Inanna’s plight speaks directly to the millions of Black women who came through the Middle Passage and endured the African holocaust.  The ancient story concerning Inanna is in so many ways a foreboding of this tragic historical event. It is a known fact that some of the prisoners of war brought from Africa across the Atlantic to the Americas and the Caribbean came from royal families. And even those who did not come from royal families still came from a royal lineage if we refer back to traditional African spiritual teachings which say that we are the offspring of rulers from the stars. In the Middle Passage, the sushumna—the  channel through which Kundalini energy flows through the chakras—Black women lost their wealth, which is their mental health and knowledge of self. 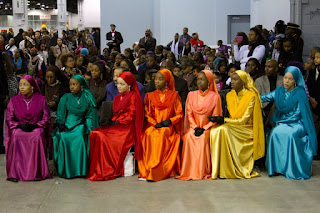 The Seven Chakra Mamas, Daughters of the Titan Atlas
Like Inanna in the Sumerian myth, millions of women from the African continent have endured unimaginable grief and torment, much of which still continues to this day. Several of them were stripped of their divinity and hung from trees just as Inanna was hung from a stake. The U.S. constitution, the very document that grants U.S. Citizens their civil liberties, regarded African women who were forced into slavery as three-fifths of a human being.  These women were the descendants of great thinkers, artists, scientists, architects and leaders who set the standard for everything that we associate with the best that humanity has to offer. How ironic is it that their own humanity was called into question by people of a lesser heritage?

The stone that the builder refused

The seven gates that Inanna fell through represent the seven chakras, the seven energy channels of the human spirit which carry the luminous spark of divinity. The lowest of the chakras is the root chakra. All trees have roots, even those baring strange fruit that come in the form of swinging corpses. At their lowest point, millions of Inannas were hung from trees in the United States of America alone.

As I listened to Chaka Khan’s song, “Through the Fire,” I realized that going through the fire doesn’t necessarily have anything to do with a woman suffering to earn a man’s love, although that scenario is undoubtedly applicable to the song . On a deeper, more meaningful level, the song is about the trials and tribulations that one faces in their personal effort to reunite with their higher self.  It can be a perilous journey, and anyone who says that they have all of the answers to the questions posed by life’s challenges is lying to you.

In the image above you can see Inanna disciplining  a lion, which is one of her symbols.  The depiction  represents mastery of self in the pursuit of a higher calling. Another symbol that belongs to Inanna is the eight pointed star which often appears in Islamic art, especially those composed by Muslim Moors. Inanna’s sacred day is Friday and her color is green, which both carry special significance in Islam as I discussed in The Secret Herstory of Islam.

I know that this isn’t one of my lengthier entries. Nevertheless, I hope that these reflections will give strength and hope to those readers who are currently going through the fire.