AbraHam's Ghost: Exposing the Kushite Origin of the Ancient Chaldeans 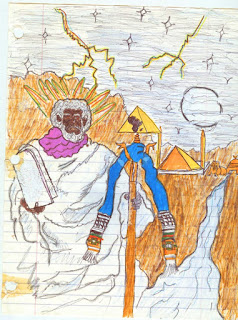 Moses as drawn by Adika circa 1997

Among Abrahamic theologians and religious officials, the unwavering consensus is that the patriarch Abraham is the father of the three Western religions which are Judaism, Christianity, and Islam. Judaism, of course, is the oldest of the three. According Jewish scripture, Abraham is a descendent of Noah’s son Shem, yet he came from Chaldea, a region that was molded by the cultural innovations of the sons and daughters of Ham.

The Hebrew name Ham means “Burnt,” which may take on special meaning once we understand that Ham is widely regarded as the patriarch of the African nations. Ham and his descendants are also considered by many Jews, Christians and Muslims to have been cursed by his father Noah. Ironically, Ham’s sons were Mizraim (Kemet), Kush/Cush (Southern Nubia) and Canaan (Phoenicia).  These three cultures were the torch bearers for civilization within the ancient world, so I’m not exactly sure how Ham and his descendants were cursed by Noah or anyone for that matter.

In the halls of academia ancient Chaldea is synonymous with ancient Sumer, Babylon, and Akkad, which the Torah says was established by Nimrod, who was the son of Kush and the grandson of Ham (Bereshit 10:6-10). Again, this is the same Ham who is considered to be the progenitor of the African nations. The Hebrew name for the Chaldeans, whom Abraham counted himself among, was the “Kush-Dim” or “Kasdim.” The name can be referenced in the book “Fullness of Time,” by Reverend William Maxwell Hetherington (1834).


Malcolm X once said that “The media is the most powerful entity on the earth. They have the power to make the innocent guilty, and the guilty innocent, and that's power. Because they control the minds of the masses.” Ask the average person on the street what their thoughts are on any subject, and you can bet that the person's opinions were influenced by the media.

In his song “Give Thanks and Praises,” off the Confrontation LP, Bob Marley sings “Noah had three sons Ham, Shem, and Japheth,” and that “Ham was known to be the prophet.” I think that the Rasta man was really onto something when he sang those lyrics which fly in the face of conventional thought.

As a side note, it is worth mentioning that the prefix “Ras,” means “Head,” in both Ethiopian Geez and the Ugaritic language of the ancient Phoenicians who were actually known as the Kena’Anu. Only the Greeks called the Kena’Anu “Phoenicians”. The Anu people came from Nubia which is where the kingdom of Kush was located. The Greeks often used the name “Ethiopia,” as a generic reference for the Nubians. Interestingly, the Greeks got much of their alphabet from the Kena’Anu, who got much of their script from Ethiopia.

Given Chaldea’s ethno-cultural relationship with Kush, who is a son of Ham, why is AbraHam—the purported father of Judaism, Christianity and Islam—usually aligned with Shem instead of Ham? It is done to obscure Africa’s influence on the three major Western religions. According to Jewish authorities, Abraham came from Ur of the Chaldees. The word “Ur” in Hebrew means “fire,” while the suffix “Ham” in the name “AbraHam,” as stated earlier, means “burnt.” There is clearly a linguistic connection here, because all burns come from fire, just as AbraHam is believed to have come from Ur.


Based on the supporting evidence, it is my informed opinion that the biblical character AbraHam is nothing more than the personification, or the anthropomorphization of the torch, the cultural legacy, that was passed from the Kushites of Chaldea onto the later Hebrews. The book Chaldean Magic: It’s Origin and Development by Francois Lenormant (1877) provides us with some valuable insight concerning Kush’s influence on Chaldean spiritual thought. If you are interested in studying Chaldean magic then Lenormant’s book is certainly worth checking out.