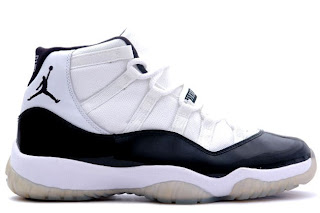 People are often admonished not to step into a great man's shoes. Based on recent news headlines, it seems that many have resigned themselves to step into Michael Jordan's instead.

There are reports of violence and arrests as sneaker fiends scurry around to cop Jordan's Retro XI kicks for the Hollow Daze. Unbeknownst to many, Nike was a marginal sneaker brand before the former Chicago Bull star propelled it to nationwide popularity on the "heels" of his endorsement deal in 1984. The more popular brands in the United States up until then were Adidas and Puma.

It's worth noting that "Nike" is the Greek goddess of war, and her name  means "Victory." On the Kabbalistic Tree of Life, Netzach occupies the seventh sephirah, and in Hebrew, the word Netzach means "Victory." This Kabbalistic sphere  encompasses the world of imagination.

The Nike sneaker brand has distinguished itself from others over the last two  decades through the imagination incorporated into its unique designs. Meanwhile, the Archangel Michael captured the imagination of the basketball world by flying from hoop to hoop in arenas across the United States of America.

As Jordan's feet were were literally planted in victory (Nikes), he managed to win six NBA championships. Right above Netzach on the Tree of Life is Tiphareth, which is the sixth sphere. The colors associated with this sphere are red and white, which are the colors that the Archangel Michael wore as a member of the Chi Ka Go Bulls. 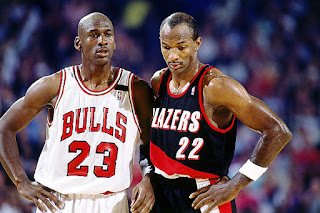 It is the "Chi" energy that you accumulate over the course of time that gives your "Ka" (soul) the impetus to "Go" and embark on a journey through the Sephirahs on the Tree of Life until you reach the highest sphere known as Kether.

In Hebrew the word Kether means "Crown." A crown is worn by a king who is conceptually the personification of the Ausarian principle on earth. The Kemetic god Ausar is synonymous with the "Bull" of Apis. December 25th signals the god's resurrection from the underworld which he rules as a Black African king.

As many people already know, the Christmas (Christ's Mass) holiday is a modern adaptation of an early European holiday, which is itself, a perverse derivative of ancient Black culture. The Christmas tree is the tree of life, which is referenced by several high cultures of the old world. The  balls that the tree is decorated with represent the sephirahs and the star at the top signifies Ausar/Kether/Metatron.

A true Chi Ka Go Bull is a "Rose" that grows from concrete. It is the individual who rises from obscurity and hardship to accomplish a mission that is seemingly impossible, which in this context, is assuming the throne and wearing the crown of Ausar.

Unfortunately, many of the people who are going beyond their financial means to purchase basketball sneakers endorsed by the Archangel Michael fail to realize that they are slam dunking themselves in the process. Instead of appeasing the Apis within themselves, they seek to boost their self image by inflating the ego of the Bizarro Ausar of the hardwood.

They already posses the inner light that they are so desperate to find in a pair of sneakers. They are  light bearers who fail to understand that the Archangel Michael doesn't care about them. If he did, he would make his sneakers more affordable to the people who admire him the most.

Let us not forget that it  was the Archangel Michael who initiated the original light bearer's downfall during the great war in heaven. However heaven is, among other things, a state of mind, and the mind is where the war is being waged against us on a daily basis. Your mind is a gift. Keep your gift wrapped tight. Hapi Resurrection Day!!!