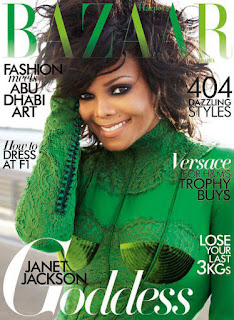 Janet Jackson is on the cover of the new Harper’s Bazaar. Interestingly, it’s the Arabian version of the fashion magazine. In a few of my blogs, most notably The Secret Herstory of Islam, I’ve pointed out that the ancient Arabian goddess Al Uzza is associated with the color green, just as Venus, Ishtar, Heru Het, and Oshun, who all embody the Pleasure Principle.

Green is also the official color of Islam, which has roots in goddess worship. The cresent moon is seen at the top of the dome of mosques across the globe, while Janet's world famous brother is known for his “moon” walk.

The Jackson family is from the state of Indiana, where members of the Black Ben Ishmael clan settled during the 18th century. The Ishmael clain had a reputation for being great dancers and musicians. Perhaps I’m just crazy and these are all coincidences. Maybe, maybe not. I’ll leave it to you to decide.

According to the Bible, Ishamel who was a son of Abraham, was the grand patriarch of the Arab nations. One of Janet’s biggest hits was “Rhythm Nation.” Maybe…just maybe…The Holy K.O.R.A.N is a book containing Knowledge Of  RHYTHM Astronomy and NATIONhood. Al Uzza weighs a ton.