The God Down Below: A Conversation with Chaos 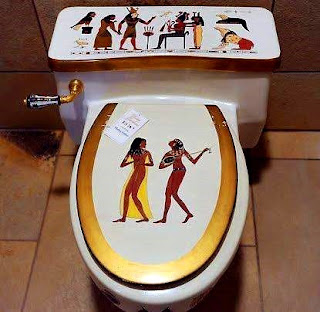 The odor was something like athlete’s foot and stale pork roasted in hellfire and brimstone. A gruesome scene from Dante’s Inferno had leapt off its tattered page and come to life at 1952 Newton Lane. Andrew Noble recognized that he needed to stop eating hamburgers and French fries during his lunch breaks. He tried to convince himself that he could kick the habit if he really wanted to. However, that mouth-watering aroma contrived by fast food scientists wearing white lab coats had called him once, many years ago, and never forgot his name.


At $7.96, Noble’s so-called “value meal” was pretty cheap. But when he dropped his stool, he played the fool, as his nose paid the ultimate price. The beautiful bathroom that Noble’s wife Margaret had designed was transformed into an awful mazmorra, not unlike the ones that Moroccan emperor Muley Ishmael had built to stash his terrified Albion slaves. The foul stench was hell on earth, and the worst part was that Noble hadn’t even dropped his seven-pound abomination of desolation. After 18 minutes of excruciating pain, Noble dropped it like it’s hot as though he had just hopped on a remix with Snoop Dogg and Pharrell. 5…4…3…2…1. Plooop!!!


Noble hated when the toilet water splashed against his ass every time he took a shit. But he’s so brain-dead and lethargic from the toxic meals that he eats that he can’t muster the will to even dodge Poseidon’s wrath. When you eat seven pounds of Het Heru a day, taking a shit becomes a question for which the water in your toilet will always have a wet reply.


Noble wiped his muddy behind then slammed the toilet lid shut, sprayed some air freshener, opened the window, then proceeded to make his way out of the bathroom. As soon as he had one foot out the door, he heard a voice that boomed “WASH YOUR HANDS MOTHER FUCKER!!!” The voice seemed to appear out of nowhere like a bushel of seedless grapes.


Noble jumped, as he was taken off guard. He knew it came from the bathroom so he went back in and started looking around. He looked at the open window and remembered that he had opened it to air out the filthy slave dungeon that his rapacious appetite had created. Perhaps there was a wheelchair-bound man from another house with a voice like Destro’s from the G.I. Joe cartoon staring at him with binoculars while he was taking a shit. “I SAID WASH YOU HANDS, YOU FLITHY BITCH!!! I COMMAND THEE, SO LET IT BE!!!”

Noble realized that the voice that he heard was coming from the toilet which he forgot to flush. He opened the lid, and to his own surprise, he saw the blackest face that he had ever seen in his life outlined in neon green ectoplasm mean-mugging him from the toilet bowl. It had cherry-red eyes, which served as a nauseating reminder of the two vanilla shakes with the cherries on top that he sipped earlier in the afternoon. The monster’s teeth were potato wedges which seemed to be sharpened to perfection.


“What the fuck!!!” Noble exclaimed before reaching for the plunger in a desperate effort to pummel the crusty Black face that was cursing at him from the toilet bowl. The face just laughed and mocked Noble’s failed effort to get rid of him. “WHO DO YOU MISTAKE ME FOR PUNY MORTAL, ABNER LOUIMA? YOU DON’T REALLY BELIEVE THAT YOUR PRIMITIVE WEAPON CAN HARM ME, DO YOU?” it bellowed. “Jesus Christ!!! Margaret, I think we’re gonna need a new toilet!!!” Noble cried, but his wife could not hear him. The volume was too high.


Margaret was bumping “Umm Hmm,” by Erykah Badu as she sang into her curling iron in front of the couple’s bedroom mirror. Margaret was wearing nothing but a silk teal bathrobe with hot-pink bunny slippers. Singing her favorite R&B songs while she stood in front of the large mirror on her bureau made Margaret’s nipples hard and her vagina hot and moist. She didn’t have the “perfect” body, but she felt so beautiful and secure in her womanhood. Margaret would stand in front of her mirror while imagining herself performing in front of jam-packed stadiums across the globe as attentive fans stood entranced by her natural elegance as they sang along with her every word.


Margaret is a taut tandoori beauty who walks with a zesty Adobo flow. Fresh thyme, parsley, and curry powder seem to color her spicy ways. As a hard-working corporate executive, and 38-year-old mother of four children, Margaret was proud of her physical appearance—stretch marks and all—and so was her husband, who was having a tough time in the bathroom. Noble started to hyperventilate before he could muster enough composure to ask the angry Black face who he was.


“Who am I? Hahahahaha!!! If Ausar is the eye above the throne, then I am surely the darkness down below. I am the god of anarchy and revolt who stands at the forefront of every bowel movement. I relieve men of their bonds, like conniving crooks on Wall Street. Humanity’s ass is my avenue. I occupy all streets. Those who fear me, follow me!!! Those who oppose me, die!!! I am the chaos bringer, the coffin filler—the primordial herald of doom!!! I receive libations at Kom Ombo, and burnt offerings at Kartoum. I'm the shit!!! Lord Sutekh!!! Not the doodoo you know as Heru!!!”

Noble was dumfounded. After years of eating greasy fast food he actually shat the Kemetic god Set-Typhoon who was cursing at him from the inside of his toilet bowl. Noble recalled his college days when he was into the whole Afrocentric movement, and would read books on ancient African religion and mythology. But there he was, far removed from the days of his youth. 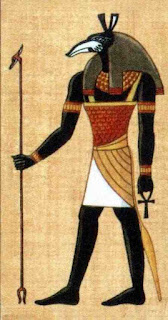 Noble went from being a Black separatist rebel who wrote poems about Black love and nationalism at the University of California at Berkley, to an assimilated Pulitzer-prize winning journalist and author who was happily integrated into white society. Talking to the god Set frightened the shit out of Noble, but it also made him realize how far removed he was from the young man he used to be.


Noble was a homeowner with a high paying job and a beautiful wife and kids. By most people’s standards, he was a tremendous success. Still there were moments, like when he was the only Black man at an all-white fundraising dinner, when Noble wished that he could let that young radical loose and “bang on the crackers,” as he used to say as a teen. However, Noble couldn’t do it—and that’s not to say that he ever did—because when it came to harming white folks, he was all talk and no action. Noble was psychologically divorced from his youth, not necessarily because he wanted to be, but because he just didn’t know who that young man was anymore.


To Noble, that kid was just a caricature from his angry, misery-laden past. As a college student, Noble would preach to anyone who would listen to him about the evils of Crazy Horse malt liquor and its adverse effects on the Black man’s reproductive system. Yet there he was, several years later, celebrating Thanksgiving, a holiday that commemorates the unscrupulous slaughter of Native American heroes like the cheap liquor’s namesake. Noble had fully assimilated into white society, nevertheless, he always felt like a sitting bull in a room full of eager matadors. Money isn’t a mood-changer; it’s an opiate that induces amnesia. Noble was a traveling man who had forgotten his way on his path to Orion's gate.


The god Set-Typhoon was committed to helping Noble to find his inner darkness so that he could discover his inner light. Every man is a Light Bearer. However, he must seek the treasures of darkness if wishes to unearth the precious gold, emeralds, and rubies that lie buried deep within his “chest.” After spending an hour getting better acquainted with the purported Nemesis of the Nile, the Pulitzer prize-winning editor knocked back ice-cold bottles of brass as the seconds on his digital tape recorder walked unmolested through the corridors of time. Noble managed to capture most of his Q&A with the god Set. What follows is a poignant, eye-opening dialogue concerning man, God and civilization.