The Mighty Thor: The Whitewashed Orisha of Scandinavia 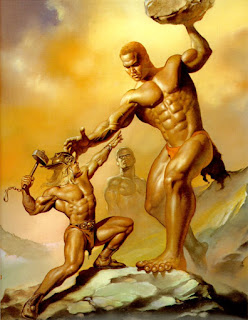 When details concerning the movie Thor hit newsrooms near the end of last year, there was a big fuss over the fact that Nigerian actor Idris Elba was cast in the role of Heimdall. The figure from Norse mythology is the watchman of Asgard, which is home to the gods.


The Neo-Nazi film critics in Hollywood felt that Elba should not have been cast in the role of Heimdall, because if you asked them, there were no Black people in Scandinavia during the centuries that the mythos had taken root. Of course anyone who is familiar with the work of Runoko Rashidi knows that there is no place on planet Earth that the Black man has not visited. We went EVERYWHERE and our cultural footprints can even be seen in the icy landscapes of Norse mythology.

Heimdall is the gate keeper, and in many ways, a spy who served Odin who is King of the gods. Amateurs who will attempt to decode the Thor movie might say that Elba was depicting a loyal Boule gatekeeper who is the advisor to the king of a vast white empire. And on some level, they could be right.

However, when we look at the BIGGER picture, all of those Norse gods are European adaptations of West African deities. In the movie, Thor is really a composite of the gods Ogun and Shango. When he was banished from Asgard he was Ogun, but when he returned, he came back as Shango. Meanwhile Loki is really Eshu and Odin is clearly Obatala. The Orisha of the white cloth is known for his piety, patience, and prudence and Odin exhibits those qualities throughout the film. According to Yoruba mythology—which is as ancient as any mythology on the African continent—Obatala banished his son Ogun from his house, although for a different reason than Odin banished Thor in the film. The story about Ogun and his father Obatala is relayed in the book Obatala, Santeria and the White Robed King of the Orisha by Baba Raul Canizares.

The runes that Thor used for the purpose of oracle divinition are peculiarly reminiscent  of the cowrie shells that Yoruba priests use for the same purpose. Some may say that it’s just a crazy coincidence. I say that it is a profound truth that has been conveniently overlooked. There were ancient Moors who served in the Roman military. At least two of them became emperors, hence the cover for the Big Daddy Kane album Long Live the Kane. Since Rome had military bases throughout Europe, it would not be a stretch of the imagination to consider that they shared aspects of their culture with the Europeans they encountered.


The Large Hadron Collider, which is the world’s largest particle accelerator in Cern, Switzerland is really an attempt to build an artificial Bilfrost bridge. The Bilfrost bridge—for those who haven’t seen the movie, or are not familiar with Norse mythology—is the pathway that connects planet Earth (Midgard) to the Abode of the gods (Asgard). Some MGM readers may recall that Switzerland, the country that the collider is currently located in, is one of the places in which Norse mythology was very prominent.

However for those of you who are Original beings, the real Bilfrost bridge is something that is very intimate and very personal. It’s your spinal column where kundalini rises along the Sushumna in your spine. The seven chakras that it activates in the process are each associated with a specific color, hence the Bilfrost is also known as The Rainbow Bridge.

Heimdall, the All-Seeing, All Knowing intelligence at the top of your Bilfrost is the Pineal Gland in your brain. Asgard is your personal Kingdom, or rather the King’s Dome, or the King’s MIND which GLOWs when it has access to the right kind of MEDIA. Ice Men don’t build Kundalini. They resign themselves to build frost, and devise technologies designed to mimic the capabilities of your Bilfrost.

I don’t think that those mad scientists in Europe realize who or what they’re potentially bringing down here in trying to build their artificial Bilfrost bridge. I guess we’ll just have to just wait and see. In the meantime, I’m going to go have a slice of chocolate cake. I need my sustenance.