The Secret History of Rastafari & The Mystery of the 7th Seal (Pt. 3 of 6) 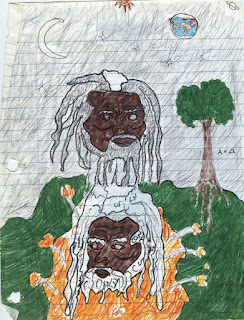 Interdimensional Rastas drawn by Adika circa 1992

In Jamaica, Rastamen were widely known for their knowledge of herbology, farming, arts & crafts, and operative masonry, which meant that they were initially great speculative masons since any operative system is initially birthed through speculation. You can speculate on how to build a temple, but unless that knowledge becomes operational then you will never actually build one. Since Masons are builders, we again see yet another relationship between Rastas and Ptah which I call the RASpTAh (Head Creator) connection.


With that said, you probably realize by now that the true “Head Creator,” the true “Ras Tafari” of the Rastafarian movement is the Kemetic god, Ptah, who was known as the creator, Father of the Gods (Chronos, Saturn) and the Grand Architect of the cosmos. In Greek mythology, Chronos was sometimes represented as a lion and contemporary Rastas salute the Ethiopian flag used during the reign of the Solomonic dynasty which depicts the Conquering Lion of the Tribe of Judah emblazed before a red, yellow and green background. 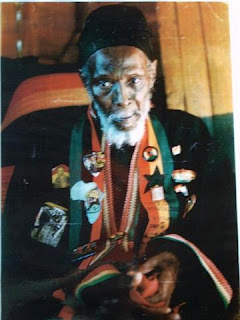 Ptah was also known as the Patron of Artists and the people who are most recognized for promoting Rastafarian beliefs are reggae recording artists. The Rasta elder Prince Emmanuel (1915 - 1994) was a priest in the Order of Ptah. The teachings of Rastafari, as they were relayed by Emmanuel, are deeply influenced by Judeo-Christian theology, which comes out of the Order of Ptah. Jews wear the yarmulke which is a variation on the theme of Ptah’s skull cap. The same can be said about the Muslim’s kuffi. In the Bible Jesus Christ points to Peter and tells his disciples, “upon this rock I will build my church.”


Etymologically speaking, the name “Peter” comes from “Ptah” who was a builder god, hence Christs' reference to building a church through Peter. The center of Vatican City is St. Peter’s Square and the popes wear a hat similiar to the skull cap of Ptah. This is not by coincidence, it is by design. In the Bible, Ptah is also presented as the King of Salaam, Melchezedek. (Mel-Chi-Zedek) Zedek is the Kena Anu name for the Roman god Jupiter. In Kemet Jupiter was known as Tehuti, who was “The Mouth of Ptah” according to Men Nefer cosmology. MelChiZedek is the priestly scribe who promulgates the gospel of Dark (Mel) Energy (Chi).


As any artist knows, artistic works are most readily created in times of Salaam (peace) when the mind is allowed to gestate in the womb of the dark void. However, if you are truly an artist you will also create under adverse circumstances because in times of hardship we turn to the best in ourselves to get us through those hard times. I know this from personal experience. Perhaps you do as well. Elijah Muhammad was also in the priesthood of Ptah and so was Clarence 13X. 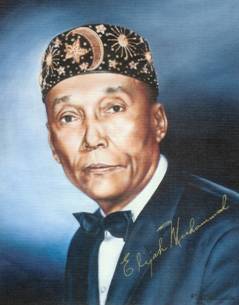 Father Allah (the word “Father” etymologically comes from the name “Ptah”) gave us the 7 in the center of the 8-point sun. 7x8=56 and 5+6=11, which gives us the Freemasonic twin towers of Boaz and Joachim. The Grand Architect acknowledged by the true Master Masons of Africa was Ptah. However, the question yet to be answered is: who is this Black Messiah, this Mahdi, the chosen one who will redeem the Black race and rid the world of spiritual darkness? It might not be who you think it is...then again it might. 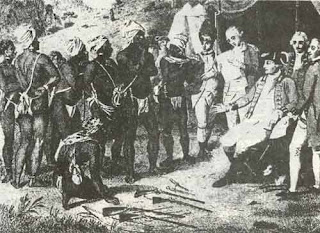 
The Maroons, who were feared for their marked aggressiveness and militaristic culture, were largely Moors from Spain who practiced Islam and/or various forms of African magic and sorcery. These Moors were politically disempowered through the crusades and the Spanish inquisition so they were eventually sold into slavery by white Spaniards and Christian Moors. The Karomante people of West Africa were a part of the great West African Moorish Confederation. Many of them were shipped to Jamaica along with Moorish prisoners of war. To add insult to injury, the Spaniards mocked these proud Nobles by calling them Maroons (savages) instead of acknowledging them as Moors. Dancehall-reggae great, Buju Banton, who was sentenced to prison in an entrapment ritual, is a proud Maroon. 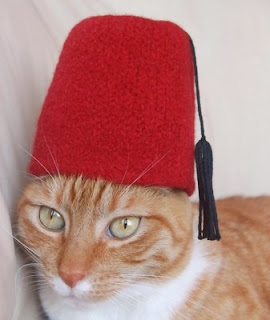 Although both of my parents are Jamaican Rastas, my mother’s side of the family came from Jamaican Maroons which may explain why she used to Moor rock a maroon-colored fez with a black tassel when I was a young child. However, my mother NEVER engaged in the formal study of what some “conscious” Blacks would call “Moorish Science.” That’s why I say that it’s one thing to call yourself a Moor because you read and enjoyed Golden Age of the Moor edited by Ivan Van Sertima. However, it’s another thing entirely when you are a Moor BY BLOOD. When you’re a Moor by blood and not artificial relation you will naturally gravitate towards your culture even if you do not engage in the INTELLECTUAL study of it.

Being a Moor is based on a spiritual bond that is encoded in your DNA and you couldn’t run away from those codons of DNA if you tried to. Can a leopard change its spots? No. A Moor is always going to be a Moor because it is a legacy that they are BORN into. Their sense of identity is not limited to the declarations of talking trees (books). No organization can MAKE me a Moor. The Head Creator, Ras Tafari, Ras Ptah, decided that I would be a Moor so I don’t need any man or woman to authenticate my Moorish pedigree. Neither do you.

Wow! That genuinely hit the mark, and this comment is to say thanks!

who is the author of this?

great insights, I would to add some of my connections of rasta and kemet as well in a discussion

who is the author of this?
great insights

A great brief history was noted here and the most powerful point I received was that "U am a Moor by Blood" Some call Noble Drew Ali the founders of the Moors when there are Moors that never even heard of him.

I am Maroon by blood and therefore a Moor by Blood. Peace to all Moors and Rastas

Thank you so much for the time you put into writing these post. Your writing style and clarity is amazing! You have really help me, in just a few short post readings, see a broader image of topics I've been heavily reading into.