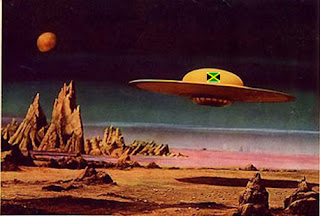 The first thing that Trevor saw when he awoke from his slumber was what looked like an enormous strobe-light that hung from the ceiling. It spun a luminous rainbow of colors that swallowed his haggard face and sizzled his tired eyes. Since Trevor wasn’t wearing his glasses the ball of light forced him to squint. Trevor was still naked, but as he felt the cold metallic slab against his back, he realized that he was no longer in his warm king-sized bed.

Groggy and punch-drunk from a night of hard partying, Trevor didn’t have a clue where he was. The last thing he remembered was falling asleep next to the two sexy Bajan runway models who were stacked on top of each other like waffles and covered in Log Cabin pancake syrup after a night of cabin stabbin’.


Trevor lifted his head and saw the sturdy leather straps that tied him to the stainless steel table. He looked around the dark circular room and saw what looked like a panoramic computer monitor. Beneath it was a control panel with numerous empty chairs that encircled him. Almost immediately, the strobe-light went out, turning the room pitch-black. A luminous blue glow came from the computer monitor. From the triangular window directly in front of him, positioned right above the monitor, Trevor could make out a dark figure behind the glass silhouette. A few seconds later the figure disappeared. The wall on Trevor’s right fell away like water at Dunn’s River Falls in the Jamaican parish of Ocho Rios and revealed the image of a woman who immediately introduced herself to Trevor.


“Ahwadi ras clot…..?!!!” Trevor screamed, barely getting the words out of his mouth. He was staring at this woman whose beauty was so overwhelming that it nearly concealed the fact that she wasn’t even human.


“Relax. Don’t worry my love. You’re not hallucinating although you did smoke a whole lot of evergreen with those ditsy broads last night,” said the woman with electric blue eyes that nearly short-circuited Trevor’s brain. “Why are you looking at me like that Trevor? I would ask you if a cat’s got your tongue, but I’ve always heard that Jamaican men don’t eat pussy. But just in case you're wondering, yes, you are looking at a real, live alien. And I’m not talking about the kind that doesn’t own a green card. I’m an alien from outer space—Neptune to be exact. My crew of cultural anthropologists are just conducting a little study. We promise you know harm. My true name is unpronounceable to Earthers so you can just call me Captain Zu-Rana Yohymn-Bey Milaku.”


Zu-Rana had aqua-blue skin and hot-pink hair styled like Princess Lea’s from Star Wars. She had the body of a stripper from Magic City and wore nothing but a gold necklace with a diamond-studded trident pendant, door-knocker earrings and black, patented leather thigh-high boots with six-inch heels that made her round, luscious bottom look fatter than it already was. On top of that there wasn’t a trace of cellulite, just a coating of smooth skin covering her ample E.T. backside.

“Rockstone!!! How you know ’ow fi speak English uhman?” Trevor asked staring at Zu-Rana, whose glutious maximus had filled the fruit of his lust with maximum length and girth. “I’m not speaking to you in English. Like everyone else in this solar system, we Neptunians communicate with one another through mental telepathy” Zu-Rana clapped back.


“My technicians have implanted a nano translator in your ears and mine. This allows you to hear my thoughts in English, whereas when you talk, your words register to my brain as a telepathic transmission. There was a time when Neptunians could communicate with Black men and women on planet Earth through mental telepathy, but that was a LONG time ago, before you had any spoken languages. Your race has been in a state of steady degeneration for almost 104,000 years which is why we can’t even read your thoughts anymore because there is so much background noise emanating from your brains when we interact with you. It’s almost as if your minds are on channel fuzz. What the fuck is wrong with y’all?


Anyway, thanks to the implanted nano device I can understand what you say with your mouth, but your thoughts remain a mystery to me. Our developing technology does not yet allow us to communicate with entities who vibrate on such a low energy frequency, but I am confident that after a few more centuries of scientific research we will be able to come up with a device that will enable us to do so to some degree. It’s a little tragic, because as a race you’re so far removed from where your Anunnaki ancestors were.”


With a stupid look on his face, Trevor just starred at ZuRa’s three huge breasts. He didn’t know who the hell the Anunookey, the Anunnarki—or whoever the hell she was talking about were—and he couldn’t care any less. “I know that you’re Vybz Kartel’s booking agent,” ZuRana continued. “ Do you have any idea why he’s bleaching his skin?” The question snapped Trevor out of his stupor. “You know who Vybz is? Are you Gully or Gaza?” Trevor asked. ZuRana just shook her head and looked at Trevor with disbelief. 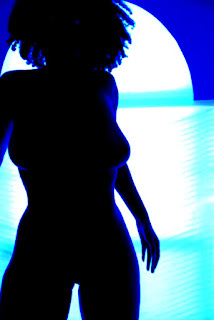 “Yes, I do. Everyone in the solar system outside of planet Earth knows who Vybz Kartel is. The Black man is highly regarded and respected by intelligent life forms throughout the galaxy. That is why we usually don’t abduct you when we visit planet Earth. We prefer whites with red hair since they are much easier to manage. We all still remember the great works of your noble ancestors. We’re all waiting for the day when the Black man will awaken from his deep slumber. We all remain optimistic that you will very soon. Not because we want to believe it, but because we have to. The universe needs your leadership. The future of the cosmos depends on you.” Trevor had tuned ZuRana out again. He didn’t hear a word that she said after he inquired about her knowledge of Vybz Kartel. He was too busy looking at her plump Neptunian breasts.

“Anyway, I usually don’t take such a hands-on approach in our experiments, but I just want to know something,” ZuRana said. “The pretty Bajan runway models that you had sex with last night have been completely unresponsive to my sexual advances. Why don’t they like me? Don’t I look attractive?”

Caught in an amorous daze, Trevor couldn’t help but wonder what Zu-Rana’s blue snapper tasted like as he gazed at the plump lips peaking out from underneath her bushy blue twat. It looked sweeter than a fresh box of chocolate truffles. Trevor wanted to bust it open like a new bag of Ruffles. He thought that if he could only net the Neptunian bird’s Chicken of the Sea he would place her on fine china and devour her supple flesh raw. He stared at the alien captain for a long moment then answered. “It nuh dat, babylove. You haffi work science pon di gyal dem. Di egghead bwoy dem call it hypnosis.” Zu-Rana’s pretty blue face was tightly-knitted with confusion. “Hypnosis? What’s that?” she asked.

“Simple t’ing babylove,” Trevor said calmly, fixing his two eyes on the three staring back at him from the areolas on Zu-Rana’s three beautiful breasts. “All mi haffi do is look inna you eye like dis an’ say ‘you ah get sleepy. Ah sleepy you feel sleepy. Keep look innamieye an’ you get more sleepy.’ That’s all you haffi do, Zu-Rana. Look deep innamieye until you feel real sleepy. Now shut you eye dem an’ go ah sleep.”

Zu-Rana’s eyes fluttered shut. Her head slumped onto her chest although she was still standing. “Zu-Rana, listen to me carefully,” Trevor whispered. “Ah hypnotize mi hypnotize you. You must now do anyt’ing mi ask yuh fi do. No ask no question. Open you eyes but stay fasasleep.” Zu-Rana’s eyes fluttered open but they glazed yellow as she stared ahead like a mindless zombie.


“Zu-Rana, release me from my bonds,” Trevor commanded. Zu-Rana slowly pushed a button on the table and the leather straps peeled away, allowing Trevor to sit up. He sat on the edge of the table and looked at the entranced alien before him. “Zu-Rana, you eva sip sky juice? It sweet nuh ras!!!” Zu-Rana replied that she had not but would like to try it.


“See di straw right here, baby. Come have a sip.” Zu-Rana walked towards Trevor, got on her knees and wrapped her soft fluffy lips around the straw and sucked on it as hard as she could. “Trevor, honey, I don’t taste anything,” Zu-Rana garbled, barely lifting her pretty face from the straw on Trevor’s lap. “Wanti-wanti no getti-getti darlin’,” said the Jamaican, whose heart raced like Usain Bolt on the run from the Gingerbread Man and the IRS. “Stop cry mon! You mouth soon fulla ice-cold flava! Promise!”


Before long Zu-Rana could taste the flood of sky juice that inundated her tiny mouth before flushing down her throat. The icy chill rushed to her cerebral cortex, giving her a severe case of brain freeze. “Bomboclaaaaaaaaaaaaat” Trevor sighed as some of his creamy sky juice spilled from the corner of Zu-Rana’s mouth onto her hardened purple nipples. “Wow, this sky juice tastes amazing,” exclaimed Zu-Rana, who’s hairdo was a mess from Trevor passionately palming her head. “Its molecular density appears to indicate that it’s rich in vitamin E, potassium, and complex proteins. The natural flavanoids are simply incredible. I’m absolutely delighted that you shared this with me, Trevor.” The Jamaican smiled. “No problem baby, you shoulda know seh mi up to di time. Now get on the table and spread you pretty leg dem, becah mi ready fi nyam yuh  blue rum cake.”

The entire spectacle was quietly viewed by two other crew members aboard Zu-Rana’s spaceship. After they felt they had seen enough they placed Trevor in their molecular fission chamber before beaming him back to his apartment on Lincoln Road between Bedford and Rogers in Brooklyn, New York. From that point on it became a policy throughout the Intergalactic Council of Space-cruising Anthropologists: when abducting the people of planet Earth, stick to white folks. Leave those crazy Jamaicans alone.