Power of the Dollar: The Occult Science and Symbolism Behind Green Magic Pt. 1 of 3 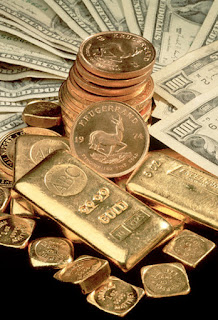 Jake Moore
The amount of money you would need to be able to walk away from it all and just live happily ever after…Everybody has one. It’s an exact number. What’s Yours?

(Bretton pauses and then smirks at Jake) More


The dialogue above was part of a conversation between the protagonist (Jake Moore) and one of the antagonists (Bretton Woods) in the Oliver Stone film, Wall Street 2: Money Never Sleeps. The scene poignantly reminds us—as though we had ever forgotten—that those who are driven by pride and ambition will inevitably become entangled in a web of greed that a lust for money will ultimately weave.


This truism explains why about 10 percent of the U.S. population owns over 90 percent of its material wealth. These neurotic oligarchs are prayed upon by the green widow spider because they have not activated the matrix for the soul affectionately known as the “Heart Chakra” in Trantric circles.


In the first three MGM blogs for 2011 we will begin to explore how the occult science and symbolism incorporated into the design of U.S. currency helps to reinforce the behavior exhibited by those covetous individuals who’ve succumbed to the potentially hazardous effects of Green Magic. In the fourth and fifth blogs of this five-part series, we will briefly explore the Lucifer Experiment which laid the early foundation for the practice of Green Magic.


But what exactly is Green Magic? It is an applied spiritual science that enables us to materially manifest the abundance of internal wealth that is inherent to us all. Unfortunately, the power to bless is also the power to curse, which partially explains why green magic has degenerated into the militaristic sorcery that is all too familiar to many of us today.


Capitalism is the militaristic application of economic principles. When you are doing business in America you are actually engaging in warfare. That’s why if you read the legal language in some business contracts, the “Binding” agreement between the two parties may be referred to as a “Treaty.” A treaty is the document that you sign after you’ve called a truce in battle. Also, the word “bind” originally meant “to cast a spell.” The entire history of capitalism has proven that it cannot thrive without exploiting people in some kind of way. And no, I’m not a socialist. I’m just a man with a conscience who sees the world clearly.


Several conspiratorial books on the Western Freemasonic connection to the so-called Illuminati have talked about the occult significance of what is believed to be an ancient Kemetic (Egyptian) pyramid on the U.S. one dollar bill. However, for any discerning student who has studied ancient architecture, and is familiar with the aesthetic preferences of various ancient cultures, it is quite clear that the pyramid on the United States dollar bill is not a Kemetic pyramid at all, but a Nubian pyramid from the ancient Kushite city of Meroé.


The Kemetic pyramids are wider at their base, while Nubian pyramids are much narrower in shape. The pyramid on the U.S. dollar bill could only be a Nubian pyramid. Also, if you think about it, it would make more sense for the designers of the dollar to use a Nubian pyramid when we understand that all symbols are used to embody a specific idea, which can only be understood within the unique context in which that idea has been presented. 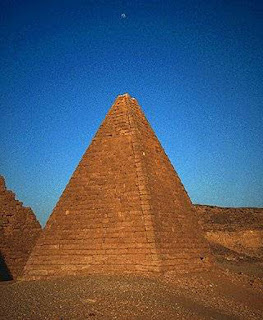 
For instance, the name Nubia means “The Land of Gold.” For centuries gold has been a coveted metal that confers great power and wealth upon a man to the degree to which he can obtain it. While Kemet may have been the place where African theology was crystallized, Nubia was the seat of its material wealth. Therefore it would be in the best interests of any new nation, such as the United States of America, to continue in the Nubian legacy of wealth and prominence by embracing the images and symbols of ancient Nubia. This young nation might even go so far as to steal Nubia’s human resources and force them to work as slaves in a bustling plantation economy. The pages of history confirm that this is exactly what happened.

Wall Street in New York City got its name from the fact that there was a long wall along that area in which African slaves were bought and sold to the highest bidders after being carried off the slave ships that had docked near Wall Street. Most of the land between Manhattan’s South Ferry and Wall Street today is actually land fill. Originally, New York City’s Hudson River extended further inland towards Wall Street where African slaves were sold to build the new plantation economy. Don’t take my word for it though. Hit the books and look it up for yourself.

Now, I know that some of you are reading this and you’re saying to yourselves “The African slaves who were brought to the Caribbean and the Americas were taken from West Africa. The Nubians were from East Africa, so there’s absolutely no connection between Nubia and the African slave trade.” However what many of these critics are unaware of is the fact that many of those West Africans who were taken as slaves were actually the descendents of the ancient Nubians, Kemau (Egyptians) and Sumerians. They were chased out from their homelands and into West Africa by Indo Europeans, Assyrians, Greeks and Romans over the span of hundreds of years.


Ausar/Ausere/Asari (Osiris) was a prominent deity in ancient Kemet. The surname “Ausere/Asari” is as prevalent in Ghana as the surnames “Williams” or “Smith” are in England and the United States. This is not by some crazy coincidence. It is because they are the same people who once lived in the Nile Valley and the Fertile Crescent. If you look at the art of Benin for example, you will see a striking resemblance to ancient Sumerian depictions. The picture right below is not from Sumer, it's from Benin. However, if I did not tell you, would you know?

During the 1st Dynasty of Uruk (from whence you get the name Iraq) there was a king who ruled over ancient Sumer named “Ku Baba. ” Baba is a common title in Nigeria and it means “Father”or “Teacher .” The kings of Sumer were also priests, which meant that they taught the people whom they administered to. This is extremely significant because there is a rum in Haiti called “Barbancourt” which has been used to raise spirits during Vodou ceremonies, a priestly duty. The Haitian pronunciation for this rum is “Baba Ku” which is the name “Ku Baba” rearranged. But this should not be surprising since the spiritual system known as Vodou has deep roots in Benin. There is definitely a cultural tie between ancient Sumer and Benin. 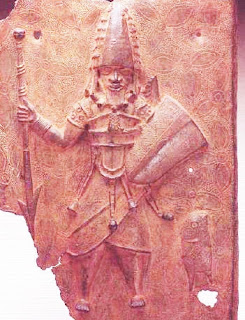 The Great Seal was placed on the dollar bill by Freemasonic president, Franklin D. Roosevelt in 1935. According to the Judeo Christian tradition, which Western Freemasonry is firmly entrenched, the first Master Mason was the Black king, Nimrod. According to the Bible, this Kushite/Nubian king was the founder of Shinar (Sumer). More importantly, he was also the man who oversaw the construction of the infamous Tower of Babel. That’s another reason why a Nubian pyramid is on the U.S. one dollar bill. It is a formal acknowledgement of the true Master Masons who came from the land of Kush.