The Estrogenda & The Media's Power of Depiction 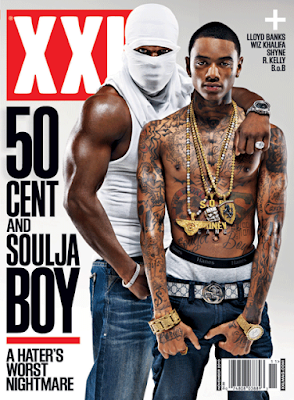 Well, what do we have here? A friend of Mind recently sent me the cover image for the November edition of the hip hop magazine, XXL. The new cover features G-Unit honcho 50 Cent alongside hip-hop’s teeny-bop sensation, Soulja Boy.


50 seems to have been somewhat of a big brother to Soulja ever since the young entertainer emerged onto the hip hop scene. When Wu-Tang Clan’s GZA criticized Soulja for contributing to the dumbing down of hip-hop music, it was 50 who came to Soula’s aid, clowning GZA and calling him musically irrelevant in subsequent interviews. GZA got the last laugh, however, when he crushed 50 with his 2008 dis track “Paper Plate.” I kind of find it interesting that G-Unit tried to sign the mediocre Mason Betha when it was at the height of its popularity in 2005. 50’s failure to complete that ritual ultimately compromised the G-Unit brand, but not because Ma$e was a great lyrical talent. We already know that he was not.


Metaphysically speaking, the signing of Mason Betha, would have been a symbolic victory that would have only consummated the occult ritual that was G-Unit’s spectacular rise to hip hop prominence. The original G-Unit is the brotherhood of free and accepted masons (for them the “G” stands for “Gnosis” and “Geometry” not “Gorilla’). 50 tried to buy his Mason, but P.Diddy would hear none of it. That’s why 50 started taunting and threatening Diddy back in 2006. He was frustrated with the fact that Diddy wouldn’t let Mason Betha out of his Bad Boy contract. 50’s boss Marshall Mathers, who is a distant relative of Golden Dawn occultist, MacGregor Mathers, was the one who orchestrated the ritual that was G-Unit’s ascent to superstardom.


More recently, 50 Cent has become Soulja Boy’s main advocate in the whole Kat Stacks debacle. For more background info on that whole situation, I suggest that you read any one of the leading hip hop news websites or blogs. What is of particular concern for me with this MGM blog entry is the use of hip hop music and culture as a tool for the demasculinization of Black male figures. XXL Magazine, which is published by Harris Publications, could have used any one of the many pictures it shot of 50 Cent and Soulja for their cover, but they chose to use this one because they are cosigning The Estrogenda, which is the agenda to get young Black males in their teens to personally identify with estrogen-filtered male images. This is evident in the Peewee Herman-like fashion sense exhibited by many of today’s teenage boys, and the entertainment media is fueling the fashion. The motivation behind the media-sponsored Estrogenda is quite simple.


As Frances Cress Welsing beautifully pointed out in her seminal work, The Isis Papers, the greatest threat to white genetic survival is the Black man’s penis. According to a 2006 report released by the Population Reference Bureau based in Washington D.C., Poland is on pace to experience a 17 percent drop in its population by 2050. Ukraine is on pace to loose nearly half of its population. More recently the Bureau conducted a study in the United States and found that non-whites accounted for 48 percent of all births over a 12-month period that ended in July 2008. The U.S. Census Bureau says that people of color will make up the majority of the United States’ population in more or less than 30 years. These are the flaming facts beneath the screaming kettle that brewed the Tea Party and the new anti-immigration, scratch that, anti-Mexican laws.


In an effort to maintain the power that they once had over the globe, some members of the white American power structure have decided that it is in their best interest to postpone the inevitable through the application covert genocide through media seduction. Yes, you read that correctly. You can kill people with media. Once you've destroyed their minds, then everything else falls into place. In fact, if you carefully study the history of the modern world you will discover that most revolutions and mass movements were initially instigated by writers. Until fairly recently, the media has been one of the white power structure’s most effective weapons in its genocidal campaign against original people.


Studies show that white women of child bearing age are giving birth to less children than they were in past years. Consequently, the Killuminazi's game plan is to turn as many Black men out as possible through media seduction while white men seek out the Black women who've been spurned by these pillow biting Black men. Through the children conceived through these unions, the astral entities that occupy the bodies of these men hope to make the Western mind the dominant influence on the planet within a few generations. Who are these astral entities I speak of? That's another topic for another day. What I will say is that the crucifix is an astral portal through which they may gain entry into YOUR mind, body and soul. If I were you, I would not wear one.


50 Cent or Soulja Boy’s sense of industriousness can be a great inspiration to young Black men and women if it is applied with integrity. Despite what some members of the “conscious community” might want to say about 50 and Soulja Boy, both are young Black men who have worked hard to obtain whatever material wealth that they have. As a young Black man who has worked hard for his modest comforts, I can respect them for that, if nothing else.


If more members of the so-called “conscious community” had 50’s work ethic then “The Struggle” would only be a topic for discussion in Black history classes, not lectures and panel discussions. If more members of the so-called “conscious community” knew how to use technology to market and promote its invaluable Human Resources like Souja Boy marketed and promoted his “Crank That” single at the tender age of 17, then more of our great Elder teachers would be living comfortably for the wonderful work that they’ve done for us.


Too often we turn up our noses at those individuals whom we perceive to be “unenlightened.” In the process we forget that none of us have deciphered all of the mysteries of the universe. We ALL have our personal strengths and weaknesses and can learn from one another whether we are “conscious” or fast asleep. Nevertheless, the IMAGE of 50 Cent and Soulja Boy that has been presented on this magazine cover undermines Black manhood on different levels.

50 Cent has his face covered like a ninja. Initially, ninjas were cowardly assassins and spies who practiced espionage on the behalf of their Japanese overlords. This is rather ironic, given that 50 has long been called a dry snitch—which is basically a spy—by some of his hip hop peers. The bloggers say that he was trying to channel Lawrence of Arabia. The main character from the Lawrence of Arabia movie was based on the exploits of T.E. Lawrence who was a spy for the British government when the British were colonizing the Middle East during the early 1900s. 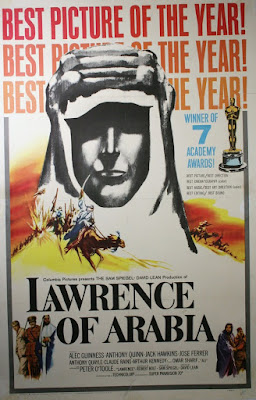 In the picture 50 has his left arm draped across Soulja Boy’s shoulder, while Soulja Boy grabs his own crotch with his underwear in plain view. It’s not even a natural looking pose, because what kind of dude grabs his cock while another man has his arm across his shoulder? What makes the cover image even more peculiar is Soulja’s neutered, altar boy, facial expression. Bishop Eddie Long is probably licking his chops with a copy of XXL right now, wishing that he could “Super Man” the Atlanta rapper.


During a magazine photo shoot the photographer usually suggests to the artists how they should pose and then the magazine’s editorial team decides on what image they will use for the cover. Naturally, the editorial team wants an image that will garner the most public interest so that it can sell as many copies as possible, thereby increasing the likelihood of satisfying its loyal advertisers. However, if the editorial staff has integrity, it will in the very least be mindful of the potential impact that the image will have on the minds of its reading audience. Most of us recognize the amount of influence that the media wields over the minds of the general public, but few of us know the ancient origin of the sometimes dark, twisted relationship between the media and the general public. 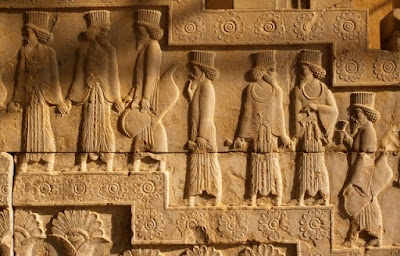 In ancient times, Media—a kingdom that was located in what is now Northern Iran—was known for having some of the most skilled magicians and sorcerers on the planet. Whenever the nearby Persian kings sought to settle disputes with enemies, whether foreign or domestic, they sought the assistance of the infamous sorcerers of Media who would cast elaborate spells to subjugate the minds of the Kings’ adversaries. Today there isn’t much difference. Every writer in today’s media who is worth their salt is either a magician or a sorcerer. The magician works to educate, entertain, inspire and empower others, while the sorcerer looks to entertain, manipulate, program and enslave you for personal gain.
If you decide to embrace any media, do yourself a favor and make sure that it’s media that makes your mind glow, because that’s WhereItzAt.
Posted by Mind Glow Media at 11:35:00 PM