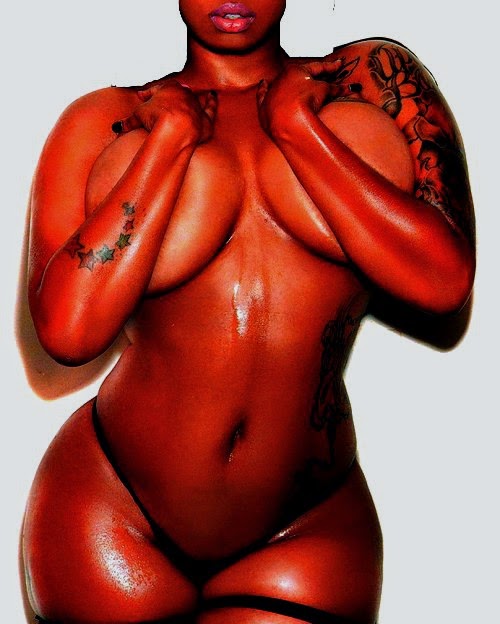 Pierre generally prefers red-bones like his beloved fiancé, Mary. However, he’d never seen a Belgian chocolate beauty like his prospective sister-in-law, before. Isis was a 43-year-old ebony bombshell with a pretty face, 28-inch waist, and 44-inch hips.

She often wore tight mini-skirts to show off her combustible curves and  mouth-watering thighs that glistened in the blistering summer sun. Whenever she was gracious enough to offer the world a glimpse of her luscious cleavage, men would feast their starving eyes on her ample gourmet breasts.


One night last June, Isis called Pierre to ask for a small favor. She requested that he drive over to her apartment in the Clinton Hill section of Brooklyn because she needed someone to help her check the wedding invitations. When Pierre reached Isis’ ninth-floor apartment he could feel the baseline to the Jones Girls’ “Nights Over Egypt” pulsing through his body.


Pierre rang her doorbell once. He rang it twice. He rang it three times. Through her peephole, framed by a gold triangle, Pierre saw what looked like the All-Seeing Eye of Ra blink once before staring back at him like a falcon. When the door opened, Pierre realized that the person holding it for him was hiding out in the corner of the doorway. For some reason they didn’t want to be seen. Nevertheless, Pierre strolled into the apartment with Ketamine calm. The door slammed shut.

Pierre turned around and saw the lovely goddess Isis in all of her splendor and glory. Most of her mysteries had been unveiled for Pierre’s naked eyes to see. She wasn’t wearing anything but aqua blue stilettos, a matching thong from La Perla and nipple tassels pasted over her dark chocolate mounds. Isis’ luscious frame blew Pierre’s brain stem to kingdom come. Even with traces of premature gray in her hair, Isis was a knockout beyond compare.


How she kept her body in such fine shape was one of the world’s great mysteries. Isis was syrupy thick, but not a patch of cellulite could be found on her tight obsidian body. Pierre was surprised when his fiancé told him that none of the men in the neighborhood had ever asked her out on a date. She was very approachable. As a matter of fact, Pierre’s previous interaction with Isis had long revealed that she was more beautiful on the inside than she was on the outside. Isis’ most beautiful curve was her smile. Given her physical appearance, that was definitely saying a lot.


Pierre later discovered that jealous women in Mary’s Church congregation scared the sorry chumps off by spreading a ridiculous rumor that Isis was a conjuror of evil demons. They even went as far as to say that she engaged in devil worship. The Queen of Darkness was adept at the Black Arts, no doubt, but by no means was she a Satanist. It was obvious that the old prunes from the Church were threatened by her stunning sex appeal and razor-sharp wit. Isis was very well learned, but as a professor of Africana Studies at Columbia University, what else would you expect? Her shelves were lined with books by Yosef Ben-Jochannan, Ivan Van Sertima, J.A. Rogers and Cheikh Anta Diop.


Pierre’s heart crackled into a bonfire of seething passion as Isis took him by the hand and escorted him to her plush living room. Pierre felt like a nervous schoolboy on the first day of Kindergarten. “What if my fiancé found out?” he thought. “Have you ever experienced the dark side of The Force?” she cooed softly into Pierre’s ear. His eyes were totally fixated on her sweet candied yams. Pierre couldn’t look her in the eye, much less offer a reply. He was at a total loss for words. “Pierre, I’ve been thinking about you night and day, so much so, that it’s beginning to interfere with my work. I need your head like a wig shop. Come here and get this sloppy top. Once you pop, I’ll do my best to sop it up like a big mop. I want you to fuck me  before you get cuffed by my sister, the red-boned cop.”


Pierre raised his head and marveled at Isis’ pretty face. Her dazzling brown eyes burned holes through his soul like hot crack rocks in a pitch-black alley. And to the weak-minded dick, her lips looked like a cult. Pierre had blown stiff with desire hoping they’d try to brainwash him. That was when Isis slowly unzipped his fly. What she found was as rare as a dollar bill that’s two bucks. She said it hung well like Klu Klux, and that she’d bury it deep in her throat like a dead man in a new tux.
Flattered and amused by Pierre’s stupor, Isis dug her middle finger deep into the crotch of her thong. When she pulled it out she wiped the French Vanilla frosting from her cake all over Pierre’s gaping lips. She said “Sweetie, I’d love to teach you the dark side of The Force. Why don’t you enroll your fine ass into my extra credit course?”

Isis’ voice was as mellow as jasmine smoke tinted by a pale moonlight that contained specks of stardust from the constellation of Sirius. The goddess left Pierre absolutely speechless. His heart was racing like the god Mercury trying to keep up with Usain Bolt and the Gingerbread man on the run from the IRS. He didn’t have a clue what to say to the exotic, mythical creature. Pierre was left stranded in a daze as Cherrelle’s “I Didn’t Mean To Turn You On,” rippled furiously from the speakers of the sound system in Isis’ plush Brooklyn apartment. “Honey, I'm going to my bedroom now. If you’re interested in having your way with me before your pledge of eternal servitude to my baby sister, I think you know exactly where to find me.”


As Isis sashayed across her living room floor, her voluminous butt cheeks swung from left to right and from right to left. The salivating serpent in Pierre’s garden tempted him to partake of Isis’ juicy apple bottom. Pierre yearned for the knowledge of good and evil, and he knew that the only way he could obtain it was through the dark side of The Force.

When Isis reached the archway that led to her bedroom, she turned slowly to face Pierre with her eyes closed and palms tightly joined in an image of pristine prayer. Standing on her left leg like some fly fudge flamingo from some mystic zoo in the ether, Isis raised her right leg slowly over her shoulders like an elegant ballet dancer and hooked it neatly behind her neck with no hands. Pierre could smell the Queen of Heaven speak to him from behind Isis’ burning bush.

“I am that I am from hence to eternity. I am your highness and your harlot, your queen and your whore. I am the barque of Ra that carries you from the seaside to the shore. Trample down my ninth gate, my love, and smite me with thy rod. Enter my creamy portal and unravel all the mysteries of the gods.” Pierre’s erection had grown stiff and firm, harder than an avocado seed. If he were a tall glass of orange juice, he’d be ready to spill for her sensual thrills.


Pierre could feel his entire mind, body and soul giving in to the dark side of The Force. He bolted out of the apartment like a mad dust head and bulleted down nine flights of stairs before blasting through the building on the way to his car. But lo and behold, Mary and the rest of his family-in-law were waiting in front of the cherry-red convertible. They were all clapping excitedly with tears of joy streaming from their eyes. Pierre’s mother-in-law Ma’at hugged him tightly and sobbed, “Son, I’m so proud that you passed our little test, and didn’t fall like autumn leaves to the temptations of the flesh. My daughter Mary couldn’t have asked for a more faithful son-in-law. The scales of judgment have spoken. Welcome to our family!”


Mentally fatigued and emotionally drained, Pierre wiped the sweat from his brow and breathed a deep sigh of relief. Isis, Mary and Ma’at were all testing him to see if Pierre would make a loyal and faithful husband, and he aced their little test with flying colors. Pierre felt proud of the decision he had made. One year removed from the wild incident, he finds himself a happily married man with a baby on the way. He’s just a year older now, but ten years wiser.

Pierre’s experience with Isis reinforced a piece of advice that his dear old dad gave him several years ago: always leave your condoms inside the glove compartment of your ride……..