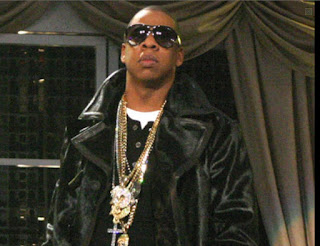 Several books and magazine articles concerning the “power and influence of hip-hop culture” have been written by hip-hop enthusiasts and curious college professors. As informative as the material may be, how many of the writers besides Black Dot (The Matrix of Hip Hop Decoded) truly understand the mystical forces behind hip-hop’s power and influence? Who are the individuals behind its emergence? Are they merely who they appear to be, or is there something deeper beneath the surface? All of these questions and more will be answered in our ongoing series on the Occult World of Hip Hop. In part one we will briefly examine the impact of one of hip-hop’s brightest stars. His name is Shawn Carter, but to his millions of fans he’s better known as Jay-Z.

On “The Takeover” the rapper from Brooklyn’s Marcy Projects introduces himself as “J-Hova” the “god emcee.” The moniker is clearly a play on “Jehovah” the name of the Judeo-Christian god. However students of the Gnostic tradition recognize Jehovah, or “Yahweh” as he is known in the Hebrew scriptures, as Yaldaboath, a deific intelligence that created man as a slave to the material world. This belief was not only held by the Gnostics but practitioners of the Hebrew Kabbalah/Cabala.

In the Hebrew alphabet each letter has a numerical value. When these letters are combined to form words there is a numerical value assigned to those words by way of simple arithmetic. If two different words have the same numerical value they are still considered to be one and the same in meaning even if they appear to be opposites based on our traditional understanding of language. The study of this high science is called Gematria. According to David Godwin’s Cabalistic Encyclopedia the name Jehovah has a numerical value of “26.” However 26 is also the number of the man who is married to impurity. Anything that is impure opposes that which is spiritual. Thus, Jehovah is the god of gross materialism, the complete opposite of spirituality.

While there are many dimensions to J-Hov’ as a hip-hop artist, he is clearly in his element when rapping about his material success. This truth is particularly evident on “30 Something” a Dr. Dre-produced song on his latest album, Kingdom Come. The title of this album reveals a lot when examined through a Kabalistic lens of perception. The Hebrew word for kingdom is “Malkuth.” On the Tree of Life diagram, Malkuth occupies the lowest sphere, as it represents the material world, the world of the five senses which deceives us. Most of the standout cuts on Kingdom Come are either about the celebration of fame and material success (“Show Me What You Got,” “Kingdom Come” “30 Something”) or the challenges that come along with it (“Hollywood”).

Still, even when Jay addresses the challenges of his material success it still ends up sounding like a celebration given its pop-oriented musical presentation. Jay has said in a couple of his songs, namely “The Bounce” and “Moment of Clarity” that he intentionally dumbs down his lyrics so that he can sell more records to an intellectually impotent populace incapable of gauging the deeper intricacies of his mind. Instead, he keeps their minds focused on the world of Malkuth (Kingdom). He uses their attention for metaphysical food to nourish his inflated ego and inflate his brolic bank account. Kingdom Come, Jay’s 10th album (Kingdom occupies the 10th sphere in the Kabalistic Tree of Life), was the highest selling album of 2006, selling over 680,000 copies in its first week of release. It marked the 9th time a Jay-Z album debuted at number one on the Billboard 200 chart. This ties Jay with The Rolling Stones at third place for the most number one debuts of all time. Only Elvis Presley (10) and The Beatles (19) have more. It may be worth noting that they all demonstrated an interest in the occult.

The title track “Kingdom Come” samples the Rick James hit “Super Freak.” This is the same song that MC Hammer used 17 years ago for his chart-buster “Can’t Touch This.” Hammer’s song helped to cement rap music in the general public’s awareness at a time when most of white America considered it to be nothing more than a passing fad. Quite arguably, there is no recording artist in music history who reveled in the joys of material success like Rick James did. By sampling James on his title track, Jay-Z is paying homage to a powerful ancestor, and in doing so revives the memory of that ancestor who in turn bestows upon him the metaphysical power he needs to forward his business agenda. Jay wanted to have the biggest selling CD of 2006 and he accomplished that with Rick James’ help. For the song’s hook Jay asks “Are you ready when kingdom come?” Just as he says the word “come” you can hear Rick James in the background say “with me.” By combing Jay’s question with the James sample the listener receives a command, which is: “come with me.” Jay is telling his listeners to follow him down the path on the Kabalistic Tree of Life which leads to Malkuth, the world of Maia (illusion).

Rap music revolves around sampling the hit records of other artists. Often times these artists are legends who have already passed on to the realm of the ancestors. When Kanye West sampled Marvin Gaye’s “Distant Lover” on “Spaceship,” a standout track from his freshman LP, The College Dropout, he wasn’t just making a name for himself. He was keeping the memory of an older legend alive so that younger generations would appreciate what that musical giant gave to the world. Some would call this “ancestor worship” but it’s actually a show of veneration. The rapper revives an ancestor who in turn rewards them with artistic critical acclaim, commercial success or both.

Voodoo priests and priestesses are the facilitators of this exercise and that’s exactly what your favorite rappers are, even if they aren’t aware of it. Whenever a 15-year-old listens to Kanye’s “Spaceship” they are also listening to Gaye’s “Distant Lover.” Even if the child has never heard of Marvin they are indirectly keeping his memory alive through their admiration of Kanye’s song. This is why there is no genre of music quite like hip-hop. It was created to bridge the gap between the young and the old; the living and the dead. It’s Voodoo with a Snoop Dogg mask on. Finally, that mask has been discarded, revealing an old face from a distant past. Papa Legba waits at The Crossroads, beckoning us to elevate this hip-hop art form through the higher spheres of the Tree of Life.

Just for your personal edification, there is also much occult significance to the title of Jay’s 2001 classic, The Blueprint, released when Lyor Cohen was at the helm of Def Jam. It was released on September 11, 2001 the day the Twin Towers came tumbling to the ground. From a conceptual standpoint, the Twin Towers represent the Freemasonic pillars called “Boaz” and “Joachim” which the Bible says was in Solomon’s Temple, Jehovah’s sacred house of worship (Kings 7:13-22).

Keep in mind that the man who owned the Towers was Larry Silverstein. In order for a Mason to make sure that what he is building comes to fruition he must use a guide. This guide is commonly known as…… a Blueprint. While Silverstein’s building came crumbling to the ground like modern day Towers of Babel, Jay’s Kingdom was just being built. Avid observers of hip-hop music know that The Blueprint marked a turning point in Jay-Z’s professional career. Although he lost his emcee battle with Nas, his power as both an artist and businessman had reached an all-time high between 2001 and 2002. It is important to understand that this does not necessarily make Jay-Z a conspirator in some diabolic plot against the very people responsible for his rise to prominence. Then again, it doesn’t mean that he is not. Only time will reveal this.

Now Jay-Z is the President and C.E.O. of Def Jam Records and has "the hottest chick in the game wearing his chain." The remix to “Déjà vu,” a song he recorded with his sweetheart, Beyoncé, is called “The Freemason’s Mix.” The cover for the record single has the image of a bee on it. This bee may stand for “Bee”-yoncé, but it is worth noting that in Freemasonry, the bee is a symbol of industriousness. Of course it’s no secret that Jay and Beyoncé are two of the most industrious entertainers in the world today. This interpretation would not be a stretch, since it is called the Freemasons Mix.

One of J-Hova’s biggest commodities on Def Jam is his former rival, Nas. The QB prophet often refers to himself as “God’s Son.” Given his label deal with J-Hova, the appellation couldn’t be more fitting. On the Busta Rhymes song “Don’t Get Carried Away” which is featured on The Big Bang, Nas refers to himself as “a pyramid architect.” According to Freemasonic teaching, the pyramid architects were the world’s first Masons. On “The N” a song not featured on his latest album, Hip Hop is Dead, Nas drops another hint concerning his personal affiliation with the secret society. He says that he’s “an apprentice, but not Trump’s.” Ironically, in Scottish Rite Freemasonry, “The Entered Apprentice” marks the beginner’s stage in the initiation process. Jay’s other hot commodity on Def Jam Records is rapper/super producer Kanye West. True, Jesus walks, but he takes his marching orders from Hova. Not Jehovah but J-Hova. Listen to the College Dropout album and pay attention to who introduces themselves after the song “Jesus Walks.”

Many readers will discount this exploration of hip-hop’s secret relationship with the occult as nothing more than a dubious cataloging of unrelated “coincidences.” Nevertheless, I hope that a few of you will at least entertain the notion that there is more to hip-hop culture than rhythm and rhyme. There is a secret world, a hidden reality that lies just below the surface of your awareness. It’s called the occult world of hip-hop. By the way: Vanglorious! This is protected by the “H” to the “I” to the “P.” With a Hop. It don’t stop. Sissieeeeees!