Rize of the Dragon Queen 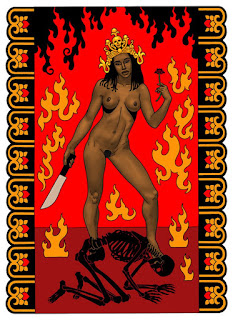 Panting and out of breath, I was running down a sparsely populated street one day when I tripped on an elevated crack in the sidewalk that sent me flying face-first to the pavement. After I fell through the street I found myself suspended in the boundless blackness of outer space.

Then suddenly, out of nowhere, a majestic figure appeared before me. It was the figure of a woman. This woman never identified herself to me, but my Higher Self later revealed that she was the Voodoo goddess Aida Wedo, who is the wife of Damballah Wedo. Aida was a fearsome queen whose image seemed to be the work of crafty Japanese animation. She looked like a character from Dragon Ball Z or Pokemon and I’ve never actually sat down and watched any of those programs. Don’t ask me why Aida presented herself to me looking like a cartoon character because I honestly have no idea. She had luminous yellow eyes and black vertical pupils that pierced through my soul. She wore a gold crown, a long orange cape and a necklace made of spinning comets that were draped across her ample breasts. Aida exhibited a composed anger. Why she was angry was something I did not know.

Seconds after Aida appeared before me hundreds of writhing, curling rainbow serpents bled from her leafy-green body. She then gave the serpents what once seemed to be a very puzzling command: “Sistas,…………….……...”

Immediately the rainbow serpents merged as a single rainbow which moved in a steady wave formation. The rainbow wave was headed towards planet Earth, a blue and white marble on my far left. After I awoke from my lucid dream I reflected on it like the ocean beneath the clear blue sky. “What was the message being conveyed to me,” I thought. My efforts to find clarity were fruitless.

Then months later I saw an HBO program that highlighted the making of the movie Queen of the Damned, starring Aaliyah. When the program aired the R&B singer had already been dead for a few weeks. Based on what I saw, the movie looked mediocre. It was nothing that I wanted to see. That was until I saw what I call, “The Scene.”

Aaliyah’s character, “Akasha,” was talking to some man at a distance. Then suddenly, she walked slowly towards him with her fangs exposed, making a creepy wavelike movement with her slender arms. Watching that movie scene sent chills through my face because it brought me back to the memory of the Dragon Queen I dreamed of just months before. They even shared the same likeness and fiery temper. This brings us to the subject of this blog entry.

It was later revealed to me that the wave of serpents that I saw represented the high-energy frequencies entering our solar system from what is reportedly an unknown sector of our Milky Way galaxy. Once this energy reaches the point of critical mass, the kundalini energy in carefully selected Black women will rise to their pineal gland resulting in the opening of their third eye and the birth of the goddess. The imminent transformation is personified by Aaliyah’s character, Akasha, in the movie Queen of the Damned. Even though it honestly was not a great movie entertainment wise, I highly recommend that you watch it, even if only to get a better idea of what I’m talking about (In the world of metaphysics and the occult the “Akasha” is the subtle energy which serves as the very basis of matter. Its main characteristic is sound. It’s worth noting that a music recording artist, Aaliyah, was cast to play the role of a character with that name).

According to a report published by Russian geophysicist Dr. Alexey N. Dimitriev, there is an abundance of electromagnetic energy entering our solar system. As stated before, the source of this energy is reportedly unknown. However, it is my contention that the origin can be traced to our galactic center, the Hunab Ku spoken of by the Olmecs of ancient Mesoamerica. Dimitriev says that as a result of this energy influx, the atmospheres of the outer planets (Jupiter, Saturn and Neptune) have become more radiant because they’re absorbing this potent energy. The intense heat that it generates has caused clouds to form at Mars’ equator. There is also “an unusual growth of ozone concentration” in the red war planet’s atmosphere.

Essentially, what Dimitriev is saying is that Mars has become more suitable for human life in recent years. When a planet has clouds and ozone in its atmosphere, dangerous cosmic rays that can damage crops and other planetary organisms are blocked out. The lush clouds and abundant ozone in our atmosphere are what stand between many of us and sudden death.

The changes on Mars may explain why former president $elect George W. Bush was so interested in sending a flight crew there. Apparently, he never got the opportunity. If he did, we certainly were not told about it. Mars’ increasingly favorable conditions have made the establishment of a colony there more realistic. Bush and his cronies knew that the Black man and woman are about to rise from their mental graves to regain rulership of the Earth. The entrance of Barack and Michelle Obama into the White House this past November is symbolic of this truth. As a result, certain interest groups are making every possible attempt to escape the Dawn of the Dead.

What is most interesting about this energy phenomenon in our solar system is the fact that it has quickened the vibratory rate of our sun. Anyone who has followed science news over the past decade knows that our sun is going ballistic. NASA photos show dark spots and solar flares that were not seen before 1996, all over its surface. According to a 2003 article headlined “France reports over 11,000 extra deaths in August heat,” which was featured on Forbes Magazine’s website, a combined 14,000 Europeans from France, Spain, and Portugal died from the heat-wave of August 2003 (Malachi 4:1). The death tolls were unprecedented and I suspect that they are related to this energy phenomenon. Lets see what happens this summer.

Dimitriev states in his report, which you can read on the Millennium Group website, that this energy will not have an impact on Earth in the immediate future. However, one must bear in mind the fact that his report was published 12 years ago. Who knows what’s in store for Earth in the years ahead. What does all of this sensational information have to do with the Black woman?

Well, melanin—a substance that has its highest concentration in the skin of Black people—contains carbon, which is a natural conductor of energy. Melanin allows us to absorb all kinds of energy frequencies including solar rays (Malachi 4:2-3) and sound-waves. Our melanin would have no problem absorbing the new energy entering this sector of the galaxy IF we are in a state of mind that is conducive to it. Once this energy reaches critical mass within our solar system a powerful force will rise within certain Black women. Nothing can stop this. It is the cosmic will. The fact that we have a strong, intelligent and truly regal Black woman behind a man who occupies the world’s highest seat of power is no coincidence.

The Blacks of Indus Kush—who were the original inhabitants of ancient India—called this force that will rise within the Black woman, Kundalini. According to modern Tantrists, Kundalini is a feminine energy, a sexual energy that dwells within every man, woman, and child. It is often called “serpentine fire” (Check the Earth Wind & Fire song of the same name on their classic album, All ‘N All). Serpentine fire surges up the spine and filters through the cranium of those who have reached an exalted state of consciousness.

Located in your spinal column are what biologists call sacral nerves, and they run from the base to the top of your spine. India’s sages called the nerve fibers on the left side the ida, and the ones on the right, the pingala. They are depicted as opposing serpents intertwined around a staff in the American Medical Association’s official logo. The bulb at the top of the staff that the serpents are coiled around represents the pineal gland situated between the two hemispheres of your brain. Occultists call this structure, which resembles a woman’s stimulated clitoris in its structure, “the third eye.” When you see Lion-El from the Thundercats cartoon looking into the eye of his Sword of Omens for “sight beyond sight” he is simulating what you can do through your own pineal gland. When your pineal gland is aroused by kundalini energy it secretes serotonin, a natural hormone that medical scientists say is chemically related to the psychedelic drug LSD.

With that said, I want to make it clear that I personally do not recommend the consumption of illegal drugs. Those who are pursuing the spiritual path should attain higher levels of consciousness through their own hard work and effort. Your acts of dedication will foment an alchemical process in which your body will produce these chemicals NATURALLY. When we let things happen naturally instead of forcing the issue we save ourselves pain and aggravation. Proceed with caution past the Door of Enlightenment. Only fools rush in.

Figuratively speaking, when the pineal gland is fully stimulated, your entire head will ignite like a stick of kitchen matches. You can then scale the inner sanctum of your mind like a flaming phoenix to perceive reality from higher levels of perception and awareness. This is because your brain has become fully functional. You are finally Awake.

However, if you’re not mentally or emotionally prepared to control the flow of kundalini you may experience violent fits of rage, high blood pressure, and in more extreme cases, a nervous breakdown. This is because you have not reached the level of self control that is required to withstand the secretion of the super chemicals inside of your body.

If you would like to avoid these health problems it would be wise to practice meditation in the coming years. Drink lots of water and consume sugar in moderation. With single parenthood, work, school, surging rent prices, and all of the other stressful conditions that plague Black women in our communities, it is especially important that they practice meditation so they can alleviate the stress that the heightened energy will surely present.
Posted by Mind Glow Media at 4:31:00 PM