The Uncanny X-Men: The History and The Mystery of the Nation of Gods & Earths 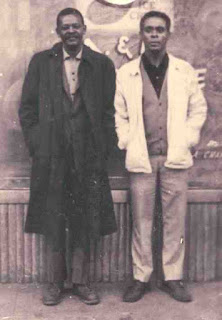 In 1963 Nation of Islam minister in training, Clarence 13X, fled Mosque Number Seven in Harlem shortly after Malcolm X did to promote his own school of Islamic thought: The Nation of Gods and Earths. According to some accounts, Clarence left the Nation because he was forced out by a hierarchy of jealous ministers. Others say that he had a dice-shooting habit that he just couldn’t brake.

Whether it was vice or jealously that spurred Clarence’s departure, we may never know. What we do know is that he introduced a radical theology that resonated with thousands of disenfranchised young Black men and women throughout the metropolitan area. They were all American outcasts, broadly misunderstood and undeservedly blamed for society’s problems. Several of hip-hop’s most respected lyricists including the Wu-Tang Clan, Rakim, Big Daddy Kane, and Nas are among those influenced by Clarence’s arcane philosophical doctrine.

Known to his followers as Father Allah, Clarence taught that all Black men and women can find their place within a three-tier pyramid hierarchy. At the bottom of this pyramid is the 85 percent or “the masses.” These, according to Clarence, were the “deaf, dumb and blind” who only showed a veneer of humanity. They do not know their origin in the world and do not have a sincere interest in finding out. Directly above them was the 10 percent. These malicious men and women have knowledge of the true and living God but use it to confuse and manipulate the ignorant masses so they will remain weak and dependant on their directives. Many “black leaders” you see on the evening news fall into this category. If they did not, you probably would not see them on television every week because it would go against the best interests of those who want you to remain at the bottom of the food chain.

At the very top of the pyramid were the Five Percenters—the poor righteous teachers who civilized the 85 percent by teaching that there is no God in the sky controlling the fate of humanity. According to them, the Black man is Allah (the Arm Leg Leg Arm Head) and he alone is in control of his own destiny once he has “knowledge of self.” Black women were called “Earths” because like the planet upon which we live, they are the nurturers of humanity.

The idea that all black men and women have the potential to achieve self-realization as meta-human intelligences is a fundamental concept of African-based spirituality. Hundreds of thousands of years ago our African sages prophesized that when humanity seemed to be on the brink of destruction, the gods and goddesses would return to right all wrongs and usher in a golden age of truth, love and righteousness. We are the gods prophesized to return.

Although Clarence’s ideas became popular in New York’s Black communities during the ’60s, ’70s and ’80s, they were actually a modified version of what Nation of Islam founder Elijah Muhammad taught as early as 1930. Elijah was influenced by Noble Drew Ali’s Moorish Science Temple and Marcus Garvey’s Black Nationalist Movement. Like all great teachers, Elijah was able to fuse his influences to introduce a more proactive form of Islam that empowered thousands of Blacks across the country. One of whom, of course, was Clarence 13X.

Yet despite Clarence’s high-minded teachings, the U.S. federal government viewed his Nation of Gods and Earths as an organized crime syndicate promoting an esoteric philosophy to mask a truly criminal agenda. According to FBI file number 157-6-34 dated Aug. 6, 1966: “The Five Percenters are made up of neighborhood groups of young Negro teenagers who have no respect for law and order.”

Although this was true in some cases, what is often overlooked by most of the Nation’s detractors—both Black and white—is the fact that the Freemasons had the same reputation in Europe just a couple of centuries ago. However, this did not stop them from becoming the primary catalysts behind the establishment of what many consider the greatest country in the world: the United States of America. Most grade school teachers make the erroneous claim that this country was founded on Christian ideals. Apparently, they have never heard of Freemasonic political philosopher, John Locke (1632 - 1704). His essays, which promoted the liberty of the individual and equality among men (rich white men, that is), had a tremendous influence on fellow Masons and Founding Fathers George Washington and Benjamin Franklin. They borrowed many aspects of his core philosophy in the framing of the U.S. Constitution

Thomas Jefferson, who was the country’s third president, was not a Christian either. He was well versed in the Bible as were most intellectuals of his time, but his personal beliefs were grounded in Deism. Essentially, Deists believed that there is no God interfering with the affairs of mankind on Earth. They believed each man was a god in his own right, free to achieve his own will and fulfill his own destiny by using the mental faculties invested in him by his Creator. If you strip away its Black Nationalist sentiments and Islamic references, the Five Percenter ideology sounds a lot like Jefferson’s Deism. The only major difference is that this proactive approach to spiritually did not come from masturbating intellectuals who owned African slaves. The gods inherited the true light of the east from the womb of the African continent.

According to the ancient Egyptians’ own historical records, their civilization as we know it was ruled by a race of gods and goddesses from at least 25,000 to 17,500 B.C.E. This was LONG before the pyramids were built (as far as consensus history goes) and charismatic pharaohs assumed the temple throne. These deities conceived illuminated priests and priestesses, demigods, who established what many writers have called “The Illuminati” by at least 11,000 B.C.E. Its job was to preserve the knowledge of our origin and true potential for the day that we were ready to rediscover our divine natures. This covert group is not to be confused with the Bavarian Illuminati (Killuminazi), a German secret society established in 1776.

The ancient African Illuminati knew that a time would come in the far distant future when Black people would suffer a spiritual atrophy that would make them shadows of their former selves. This is where early Christian theologians got the idea of “The Fall of Man.” What caused this fall is actually part of a natural cosmic cycle which is the degeneration of the Egyptian god “Atum.” The atom is composed of a nucleus with a ring of electrons revolving around it. When these electrons revolve around an atomic nucleus at the speed of light, you have energy, which is actually matter in its most active phase. When the revolutions become slow, the energy becomes a solid, which is matter in its dormant phase. This is the meaning behind Albert Einstein’s famous equation E=mc2: energy is matter moving at the speed of light.

In the days when the gods first walked the earth—over 4 billion years ago—the atoms that made up our planet had a much higher vibration due to their rapid electronic spin. As a result, the gods of Egypt were not made of flesh and blood. Their physical composition was more like plasma energy. The gods were spiritual beings while the planet and its wildlife were IDEAS projected from the collective mind of the gods through the application of Will. The gods’ inner longing for continued growth and self-improvement was externalized as towering trees and colorful birds soaring above a virtual landscape. The impetus to communicate divine will materialized into streams and rivers. The desire for sexual release became the volcano. In other words, the entire natural world is the CONDENSATION of the ambient thoughts that formed around the collective mind of the gods.

But as the planet’s atomic vibration fell from the Upper Yetzirah spoken of in the Hebrew Kabbalah—Earth, and everyone on it—became locked into the Kabbalistic world of Asiah (the Objective plane of solids, liquids and gases) where we currently reside today. "The Mother Plane" alluded to by Elijah Muhammad in his book The Fall of America, was not a spaceship, but a metaphorical reference to Kether the highest "plane," the first plane, the mother plane, on the Kabbbalistic Tree of Life. As we become reabsorbed back into the infinite with the coming paradigm shift, the mother plane will be responsible for the destruction of the world as we know it, just as Muhammad said. When explained in its proper context this destruction is a good thing. After the gods and goddesses shed their flesh, the priests and priestesses they left behind could still consult them through meditation or even invoke their presence by chanting the “Heka,” divine words of power, or playing specific drum patterns as is done in Vodou ceremonies. This is why African American slaves were put to death for making or playing drums following the Stono River rebellion of St. Paul’s Parish in 1739. The Roman Catholic Church was afraid that the drum would musically facilitate the return of the gods.
Posted by Mind Glow Media at 6:29:00 PM